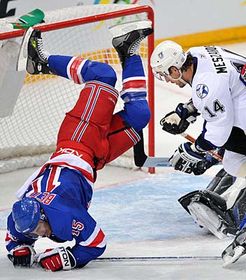 Photo: CTK A piece of history was made at the weekend, when the first NHL ice hockey games ever held in the Czech Republic took place in Prague. In Saturday’s season opener, New York Rangers defeated Tampa Bay Lightning 2:1 in front of 17,000 fans at the city’s O2 Arena. The second match in the two-game series, on Sunday, saw the same score-line – along with both a higher standard of play and a far livelier atmosphere. In fact, some were disappointed by the relatively quiet curtain raiser, although Rangers’ Czech defenceman Michal Rozsíval says the fans gradually became more animated: 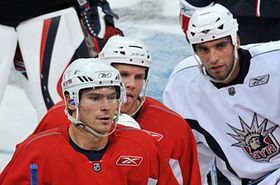 Michal Rozsíval (right), photo: CTK “They were a little calm at the beginning. But I think as the game went on they got more into it, and at the end I think there was a good atmosphere.”

Sunday’s second game in particular brought the razzmatazz of the NHL home to Czech fans, and they may get another chance to experience it: the newspaper Sport reported that talks on another NHL visit next year were “on the right track”.

By the way, officials from New York Rangers didn’t just see their team make a perfect start to the season in the Czech capital – they also signed a deal on co-operation with Slavia Prague. However, details of what that entails have yet to be revealed. Tomáš Berdych, photo: CTK The Czech tennis player Tomáš Berdych has taken the fourth ATP title of his career, with victory in the Japan Open in Tokyo on Sunday. The 23-year-old overcame Juan Martin Del Potro 6-1 6-4 in the final, perhaps aided by the fact the Argentinean had to leave the court to take medicine for a stomach problem. In any case, Berdych took the USD 135,000 prize money and his first title since Halle in Germany last year. He has also become the top-ranked Czech player, having risen to 21st in the world. Radek Štěpánek – who reached the semi-finals at the Metz Open in France last week – is now 29th.

Mladá Boleslav go top of Czech league, at least for a day

Mladá Boleslav moved to the top of Czech football’s Gambrinus Liga on Sunday with a 3:1 win over Příbram. They won’t enjoy that leading feeling for long though, as either Sparta or Slavia will go top after Monday’s Prague derby at Letná (that game was due to take place after the recording of this programme).

Slavia will be looking forward to Tuesday’s draw for the UEFA Cup group stage, after overcoming the Romanian side Vaslui. Sparta, by contrast, were sent out of the competition by Dinamo Zagreb last week; Baník Ostrava, meanwhile, failed to get past Spartak Moscow.