In Sports News this Monday: Rudolf Kraj fails to become the first Czech professional world boxing champion after his WBC cruiserweight title fight with Italy’s Giacobbe Fragomeni is halted in the eighth round – Kraj says the referee favoured his opponent; in football, Sparta Prague get their first win under Jozef Chovanec; Bohemians 1905 go top of the second division and celebrate the anniversary of a famous league title; and Czech ice hockey player Rostislav Klesla accidentally knocks out the New York Rangers coach. 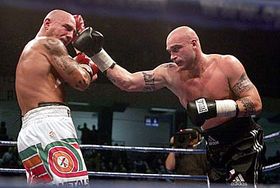 Rudolf Kraj (right), photo: CTK Kraj misses out on world title, says referee favoured Italian opponent Rudolf Kraj has failed in a bid to become the first ever professional world champion boxer from the Czech Republic, after losing on points in a bout to decide the vacant WBC cruiserweight world title in Milan on Friday night. Kraj, who is 30, was trailing local fighter Giacobbe Fragomeni 74-77 on all three judges’ scorecards when the fight was stopped in round eight because of a cut on the forehead the Italian sustained in the previous round from an illegal headbutt. Rudolf Kraj (right), photo: CTK A clearly frustrated Kraj told reporters a “triviality” of that kind would not normally halt a major boxing match. He said Fragomeni was tiring and accused the referee of being on the side of the Italians and stopping the bout so as to prevent him taking the lead.

It was the first defeat as a professional for the Czech, who had a 15-bout winning series behind him going into Friday’s fight. Now the man from Mělník, who took gold in the light heavyweight category at the 2000 Olympics in Sydney, says it is possible he may never get another shot at a world title.

Sparta get first win since mid-September 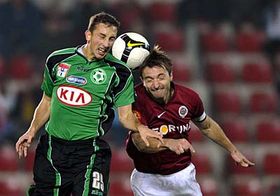 Sparta Prague - Příbram, photo: CTK Sparta Prague notched up their first win since mid-September, and the first under new coach Jozef Chovanec, with a 3:0 victory over Příbram in the Gambrinus Liga on Saturday. That result leaves them in third place, four points behind Slavia and two behind Mladá Boleslav. Those two clubs were due to take part in what could turn out to be one of the most important games of the season on Monday evening, after the recording of this programme.

The Czech ice hockey player Rostislav Klesla was involved in a curious incident in the NHL at the weekend. The Columbus defenceman was tussling with two New York Rangers players by the substitutes bench when his stick flew up and hit Rangers’ coach Tom Renney. Renney was briefly knocked unconscious, though it wasn’t long before he was back on his feet.