In Sports News this Monday: Olympic champion and javelin world record holder Barbora Špotáková is, entirely predictably, named Czech Athlete of the Year; Slavia Prague get off to a losing start in the UEFA Cup group stage – Aston Villa’s Gareth Barry tells us it was a game of two halves; and the Czech Republic’s ice hockey players finish second in Finland’s Karjala Cup. Barbora Špotáková, photo: CTK It came as no surprise to anybody at all when Barbora Špotáková was named Czech Athlete of the Year at a ceremony in Prague on Saturday night. Špotáková had the kind of season most athletes can only dream of, winning gold in the javelin at the Olympics, before later setting a new women’s world record in the discipline. Every single one of the 136 officials, trainers and journalists who voted in the Athlete of the Year poll put Špotáková in first place. It was an all-female top three, with Věra Cechlová, who came fifth in the discus at the Olympics, in second, followed by Zuzana Hejnová, who came seventh in the 400 m hurdles in Beijing. Barbora Špotáková: 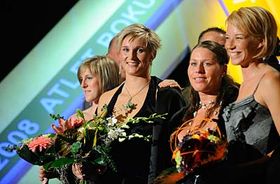 Czech Athlete of Year, photo: CTK “I didn’t expect it…But I’m glad that people also voted for Zuzka Hejnová, who just keeps getting better. There are three criteria according to which people vote: the Olympics, results that year, or if a sportsperson is improving…Věra achieved her second best result at the Olympics…The three of us are friends and I think we look good on the podium together!”

Barbora Špotáková is also in contention for the World Athlete of the Year awards, which are being handed out in Monaco on November 23. She says she is curious to see if throwing disciplines really are less highly regarded than sprinting. Gareth Barry, photo: CTK Slavia Prague lost 1:0 to England’s Aston Villa in their first group stage game in football’s UEFA Cup on Thursday night. Over 20,000 fans at Eden stadium saw the visitors go ahead midway through the first half, when Steve Sidwell scored with a deflection off team-mate John Carew. Slavia rallied strongly in the second half but could not convert any of a host of chances to get back into the game. Aston Villa’s England international Gareth Barry came on as a late substitute for the visitors:

“I think the only thing that separated the teams was that we took our chance, really – bit of a deflected goal. It was a game of two halves: we dominated in the first half and they played very well in the second half and were unlucky not to score.”

Do you think you were lucky yourselves, or did you do just enough to get by, so to speak? 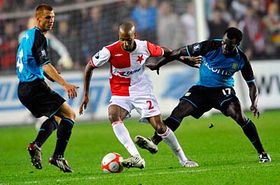 Slavia-Aston Villa, photo: CTK “Yeah, I thought we won the game in the first half. As you say, they were very unlucky not to score in the second half, because they created a lot of chances. Overall it was a tight game, but as you say we got the bit of luck with the goal.”

Back in the Czech league, Slavia messed up on Sunday: despite being two-nil up at České Budějovice with just 18 minutes to go, the leaders conceded two goals and dropped two points.

The Czech ice hockey team finished second in the first tournament of the Euro Hockey Tour, Finland’s Karjala Cup. After losing to the hosts and beating Sweden, victory over Russia would have given the Czechs their first win in the Karjala Cup since 2002. Alas it was not to be, with Vladimír Růžička’s men losing 1:0 to the Russians on penalties on Sunday.