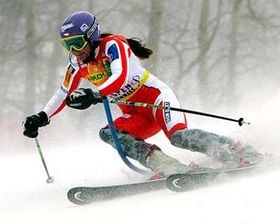 Šárka Záhrobská, photo: CTK Skier Šárka Záhrobská won the first World Cup slalom event of her career in the American resort of Aspen on Sunday, recording the top time in the first run and coming second in the final leg to finish a total of 23 seconds ahead of her nearest rival. It had taken the Czech many years of work to reach the top of the podium; she had three second-place finishes and two thirds in her previous 114 starts since 2002. What’s more, Sunday’s first place was Záhrobská’s first international victory since the 2007 World Championship. The conditions were tough at Aspen, with strong winds and an icy surface – something Šárka’s trainer father Petr Záhrobský believes worked to her advantage:

“I think that fact it was so hard shows that Šárka has great technique. That technique has to come through when you are on ice – the more the surface is soft and broken up, the less important technique becomes.” 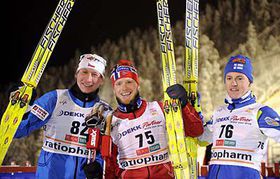 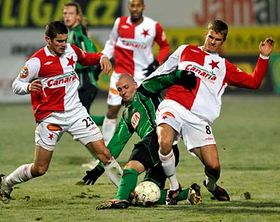 Slavia Prague - Příbram, photo: CTK The Czech football league has just entered its winter break, with Slavia Prague ending the first half of the season six points in front. They could have had a even happier Christmas with an eight-point lead, had striker Tomáš Necid converted a penalty in their game away to Příbram on Sunday evening. As it happened, that match ended 0:0. Elsewhere, second-placed Mladá Boleslav kept up the pressure on the leaders with a 2:0 win over Zlín. And Sparta Prague haven’t given up the fight either, though despite a 5:0 win (including a Patrik Berger hat-trick) over Kladno they are still ten points off the pace.

Goalkeeper Daniel Zítka has won plaudits for his appearances for the Czech side when Petr Čech has been injured, but will now be out himself for some time after breaking a leg in a game for Anderlecht at the end of last week. Zítka, who also lost two teeth in a clash with an opposing player, then fell off a stretcher when he was being carried off after one of the bearers stumbled.