Close but no famous result against Swedes at Floorball World Championships 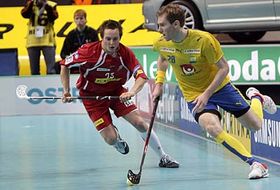 Czech Republic - Sweden, photo: CTK We begin today with the Floorball World Championships, which are taking place here in the Czech Republic. The hosts made light work of Russia in their opening game on Saturday, winning by a whopping 8:1. But Sunday’s opponents Sweden were rather a different proposition; after all, the Swedes invented floorball, and have won the previous six world championships without losing a single game. The Czech Republic opened brightly, taking a 2:0 lead, and the home crowd in Ostrava were no doubt dreaming of witnessing a famous victory. In the end, though, it wasn’t to be, with the Swedes eventually running out 5:4 winners. The Czech Republic’s Aleš Zálesný shared his thoughts after the game.

“We played great at the back, and we scored a few goals. It’s a pity about the beginning of the final period, when we conceded two quick goals in a minute and a half. Otherwise I think we had it in us to win, or at least to draw. There’s a great crowd here in Ostrava and I think the spectators deserved to see us win.”

The Czech Republic’s next game at the Floorball World Championships is against Latvia on Tuesday evening. 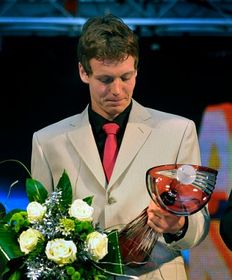 Tomáš Berdych, photo: CTK Tomáš Berdych has taken the Golden Canary award for Czech tennis player of the year for the fourth time in a row. This year the 23-year-old fell from ninth to 20th in the world rankings, so his win perhaps reflects the fact it was not a great year for Czech tennis in general. Berdych is philosophical about his season.

“I’m glad of the award. Of course I’d prefer if my results on the court had been a bit better. But it’s a long season and things go up and down. I was out for a relatively long time with injuries…This award is for the whole season, and really there is only room for improvement.” 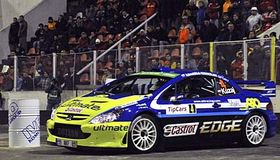 Peugeot driven by Leszek Kuzaj, photo: CTK The Prague Rally Sprint motor race ended in tragedy on Saturday when two spectators were killed after a car driven by Poland’s Leszek Kuzaj skidded and crashed. Witnesses said a group of Polish rally fans had not reacted to calls from race officials to move away from an area designated as dangerous. The race was called off when the accident occurred and organisers say they may not hold it again.