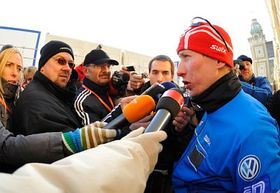 Lukáš Bauer, photo: CTK The nine-day, three-country Tour de Ski cross-country competition is now in Prague, with competitors taking part in a sprint on artificial snow at the city’s Výstaviště exhibition grounds as we broadcast this programme. Monday’s Prague leg follows the first stage in Germany’s Oberhof which didn’t begin too well at all for last year’s winner, the Czech Republic’s Lukáš Bauer, who came 31st in the 3.75 km free on Saturday. On Sunday, however, Bauer – taking part in his favourite race, the 15 km classic – climbed to 15th overall. What’s more, the opening races of this year’s Tour de Ski were extremely close, and the Czech was half a minute off first place and just four seconds off third after day two.

Following Monday’s sprint in Prague, the competition moves to another Czech venue Nové Město na Moravě on New Year’s Eve and New Year’s Day, before coming to a close in the Italian resort of Val de Fiemme next weekend. The Tour de Ski was first held two years ago and is part of the cross country skiing World Cup. 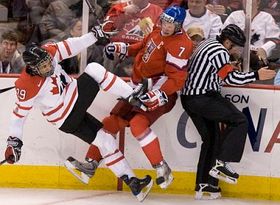 Czech Republic - Canada, photo: CTK The Czech Republic’s junior ice hockey players experienced an icy cold shower in their opening game at the World Under 20 Championship, losing 8:1 to the hosts Canada in Ottawa on Friday. The Czech youngsters were again defeated on Sunday, this time 4:3 by the USA. Their next game against Germany on Tuesday will be important in the battle for the playoffs at the junior World Championship. 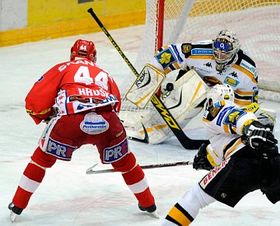 Slavia Praha - Litvínov, photo: CTK In the Czech Extraliga, Slavia Prague ended a run of five defeats with an impressive 6:1 home win over league leaders Litvínov on Sunday in the most closely watched game in the 35th round. Remarkably, Slavia’s goaltender Stanislav Neruda completed his first game between the posts in a top-flight game just three months short of his 35th birthday. Throughout his career Neruda had plied his trade in Czech hockey’s second tier, and said he never thought he’d get to play in the Extraliga.

Roman Bednář brought his tally in football’s English Premier League this season to six goals after his late header helped bottom-of-the-table West Bromwich Albion to a 2:0 home victory over Tottenham Hotspur on Sunday. West Brom manager Tony Mowbray hailed the performance of the Czech forward, who played despite suffering flu symptoms before the game.