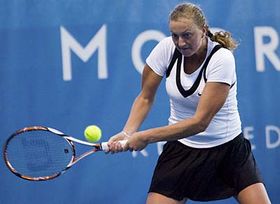 Petra Kvitová, photo: CTK With the Australian Open just getting underway, the 18-year-old Czech tennis player Petra Kvitová has had the perfect preparation, taking her first ever WTA title with victory in the Hobart International in Tasmania on Friday. In fact, it was an all-Czech final, with the 18-year-old recording a 7-5 6-1 win over her room-mate Iveta Benešová. For Kvitová, facing her good friend did make the match a bit different.

“It was quite strange, but I have to admit I wasn’t as nervous as I usually am, and as I expected to be. In general everything was cool enough, but the conditions were tough – it was cold and really windy, so it was really hard.”

Vaidišová rules herself out of Fed Cup action again

Nicole Vaidišová, who was knocked out in the first round in Hobart, has said once again she will not be available to play for the Czech Republic in Fed Cup ties this season. Vaidišová was number 7 in the world in 2007 but is now outside the top 50; her managers say she wants to focus on getting back to the top. 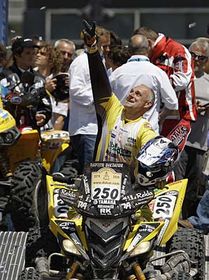 Josef Macháček, photo: CTK The Czech driver Josef Macháček has come first in the quad category of the famous Dakar Rally for the fifth time. Even though the 51-year-old had a two-hour lead on his nearest competitor, he says he couldn’t be sure of victory until the very end of the race.

“It was much harder in 2007…As every year, after a day of rest I get into first place and then holding on to the lead is very demanding mentally. Today I was worried about every technical detail concerning my quad.”

Josef Macháček says he has now retired from the Dakar Rally’s quad category, but may be involved in the event in some other way in the future.

Aleš Loprais, nephew of the great Karel Loprais, had an extremely frustrating end to the race – in eighth place on the penultimate stage, he had to withdraw due to a problem with the clutch of his Tatra truck.

The Czech Republic has a second speed skating star: following Martina Sáblíková’s success in recent years, Kateřina Novotná is a new name to remember, after the 24-year-old came second overall in the European Short Track Speed Skating Championships in Turin on Sunday.