In Sports News this Monday: Šárka Záhrobská takes silver in the slalom at the Alpine World Ski Championships; Martina Sáblíková wins her third race in a row in the Speed Skating World Cup, cementing her overall lead; Radek Štěpánek climbs to 19th in the world rankings after his career fourth title in San Jose, where he also picks up a doubles trophy; and talks on bringing the NHL to Prague again this autumn fall through.

Silver for Záhrobská in slalom at Alpine World Ski Championships 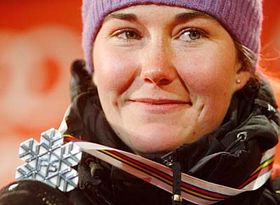 Šárka Záhrobská, photo: CTK The Czech Republic’s Šárka Záhrobská has taken the silver medal in the slalom at the Alpine World Ski Championships. The reigning champion was only beaten this time out by Maria Riesch of Germany, who has been dominating the event this season. Along with a bronze from 2005, Záhrobská, who is 24, now has a full set of medals from consecutive world championships. There were complaints about the tough conditions on the course at Val d’Isere, with some of the favourites failing to complete the slalom competition. Šárka Záhrobská, however, seemed to take things in her stride and was characteristically laid-back when she spoke to Czech Television after receiving her medal on Saturday.

“Today’s event was very difficult. Of course the pressure was intense. When you’re the defending world champion, you try to put it out of your mind but it is there in the background…When I crossed the line I didn’t think I’d be among the medals, though this slalom evidently wasn’t just difficult me but for the others too. Manuela Moelgg and Lindsay Vonn didn’t finish, so that moved me up to second. I’m really glad – it’s amazing.”

“Winning three medals in a row – that shows that Šárka’s performance is stable and world class. Now I just expect that medals will come in other disciplines.” 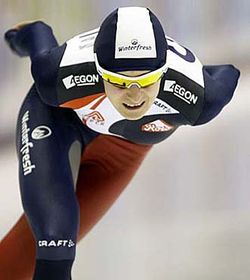 Martina Sáblíková, photo: CTK At the moment it seems to be “another weekend, another success” for the Czech speed skater Martina Sáblíková. Six days after taking gold for the first time at the World Allround Speedskating Championships, the 21-year-old’s latest triumph came in the Speed Skating World Cup, when she came first in the 5000-m at Holland’s Heerenveen. That was Sáblíková’s third first place in a row in the World Cup, and cements her lead at the top of the overall standings. Among the crowd at Saturday’s race was a busload of supporters from the town of Velký Osek, where the first Czech Republic’s first dedicated speed skating hall should be built. 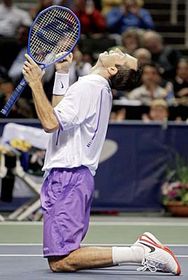 Radek Štěpánek, photo: CTK The Czech Republic’s Radek Štěpánek has risen to 19th in the world tennis rankings after taking his second ATP singles title of the year, the SAP Open in San Jose. Following a win over Andy Roddick in the semi-finals, Štěpánek defeated another American, Mardy Fish, 3-6 6-4 6-2 to take the trophy on Sunday. But his career fourth singles title wasn’t the 30-year-old’s only haul from San Jose: Štěpánek also comes away with a doubles trophy, after he and Germany’s Tommy Haas defeated Rohan Bopanna of India and Jarkko Nieminen of Finland 6-2 6-3.

No NHL repeat for Prague this autumn

The historic first ever NHL ice hockey games that took place in Prague at the start of this season – with New York Rangers and Tampa Bay Lightning facing each other at the city’s 02 Arena – will not be repeated this coming autumn. The Czech organisers have pulled out of talks on the matter with the NHL, saying they are too busy with other events this year and that the concept is less attractive since the US dollar started regaining strength.