In Sports News this Monday: the Czech Republic take just one medal at a controversial Nordic World Ski Championships in Liberec; the fans aren’t happy with only three goals scored in six Czech football league games at the weekend; the ice hockey Extraliga playoffs get underway; and the Czech tennis team are in Ostrava ahead of a Davis Cup first round tie with France. 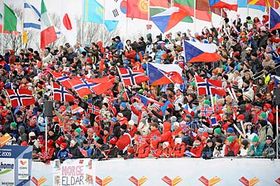 Photo: CTK The 12-day Nordic World Ski Championships in Liberec, which came to a close on Sunday, will probably not be remembered too fondly. One of the biggest sports events ever hosted by the Czech Republic was also one of the most controversial, amid accusations of poor organisation and even corruption. From the purely sporting point of view the world championships weren’t much of a success either, with the Czechs taking only one medal, silver for cross country skier Lukáš Bauer in the 15 km classic. There were high hopes Bauer and Co. could do well in Friday’s relay, though they were dashed immediately when first man Martin Jakš put in a performance to forget, leaving his three team-mates off the pace. Coach Miroslav Petrásek had this to say after his charges finished 12th.

“I definitely didn’t expect that Martin, who begins every relay so well, would put in such a terrible performance. I was hoping Lukáš would perform excellently, but again things didn’t go as I had imagined they would. We lost touch with the French, and then it was only a case of finishing the race.”

However, despite only taking one medal in Liberec, the Czech Republic did notch up a few commendable results, such as seventh place in the 50 km free for Martin Koukal and top ten placings for ski jumper Roman Koudelka. 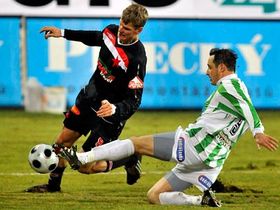 Slavia - Bohemians, photo: CTK It wasn’t the most exciting of weekends in the Czech football league, with only three goals scored in six games. Summing up the reaction of fans, one of Monday’s papers featured the headline “Desperation, boredom, catcalls”. League leaders Slavia Prague squandered a series of chances in a 0:0 draw at home against Bohemians Praha, while Baník Ostrava-Žižkov, Sparta-České Budějovice and Zlín-Kladno also ended scoreless. 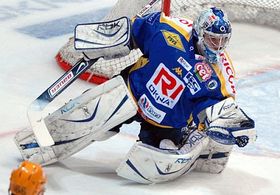 Jakub Sedláček, photo: CTK Playoffs begin in the Czech ice hockey Extraliga on Monday evening, when Litvínov play the first of their best-of-seven series with Karlovy Vary and Sparta Prague do likewise with Zlín. The other quarter-finals pairings are Slavia-Vítkovice and Pardubice-Plzeň, with their series getting underway on Wednesday. Much has been made of the relative youth of some of the goaltenders taking part in the playoffs; for instance Zlín’s Jakub Sedláček, who had the highest success rate in the regular season, is only 18. 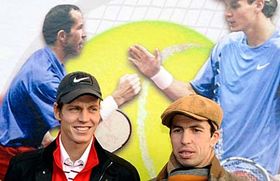 Tomáš Berdych, Radek Štěpánek (right), photo: CTK The Czech tennis team are in Ostrava for training ahead of a Davis Cup first round tie with France that takes place next weekend. The in-form Radek Štěpánek is the highest ranked Czech player for the first time since he returned to the Davis Cup team, though he told the newspaper Sport he doesn’t feel any extra responsibility this time out.