In Sports News this Tuesday: Karlovy Vary records an historic ice hockey championship triumph; Slavia draw in the Prague football derby to take another step towards the title; there’s no rush to fill the Czech national football manager’s vacant spot; and a Czech tennis player humbles the mighty Serena Williams. 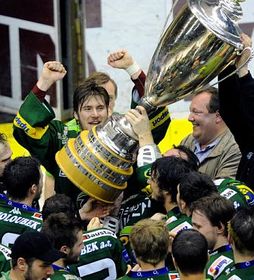 Photo: CTK Karlovy Vary became Czech extra league champions for the first time in the club’s history on Sunday. The west Bohemian side made their supporters suffer by trailing 0:3 in the first third against Slavia Prague. But they scored twice in each of the two remaining periods for a heart stopping climax to the season. The victory gave Karlovy Vary a 4:2 lead in the series and sweet revenge for the defeat in last year’s finals against Slavia. The win is perhaps even sweeter given that few gave Karlovy Vary much chance of getting to this year’s finals, much less winning the title. A series of players were sold before the start of the season without new signings to replace them and the club’s form appeared to slump until a revival in December. 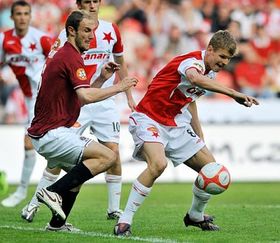 Slavia - Sparta, photo: CTK In football, leaders Slavia had the chance to put the league title almost beyond doubt when they took on second-placed Sparta in the big Prague derby on Monday. The league leaders went into the game with an 11 point lead over Sparta and that is how it stayed following a 1:1 draw. The draw moves Slavia a step closer to retaining the title with only seven games remaining and their 82 rd minute equalizer means that they have still to suffer a home defeat in the current campaign. But manager Karel Jarolím still saw it as two dropped points: “We are just left with putting this right, if possible at the next match at Kladno. It would be good if could manage that and win. We are left with seven matches and I think that around 10 points would be enough.” The Slavia manager is notoriously hard to please. 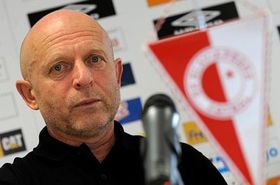 Karel Jarolím, photo: CTK As the dust settles over the sacking of the Czech national football coach, Petr Rada, and banning of six squad players, nobody seems to be rushing to pick up the manager’s mantle. The top media and betting shop tips to become the coach are current Slavia Prague manager Karel Jarolím and former national team captain and experienced manager Ivan Hašek. Hašek said he is currently managing a club in the United Arab Emirates will not respond until the season there is completed at the end of May. Jarolím is keeping quiet about his intentions but has underlined his commitment to Slavia. That would appear to give a red card to the football federation’s hope that a new coach to salvage Czech football’s calamitous situation might come at the end of this month. 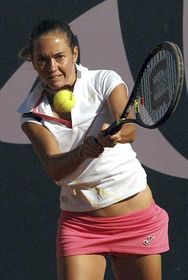 Klára Zakopalová, photo: CTK The biggest upset of the week was created by Czech tennis player Klára Zakopalová who knocked out top seed and Australian Open winner Serena Williams at a clay court tournament at Marbella, Spain. The 27 year old Czech, who turned professional in 1999, won 6:4, 3:6, 6:1 for the first round triumph.