In Sports News this Monday: the Czech Republic impress in their final game before the ice hockey World Championships; legendary goaltender Dominik Hašek, 44, is said to be close to joining home town club Pardubice; the Czech women’s team prepare to face the US in the Fed Cup semi-finals, with worries Petra Kvitová may miss the tie through injury; and Zdeněk Grygera salvages a point for Juve, while Petr Čech reaches the FA Cup at the end of a nightmare week. 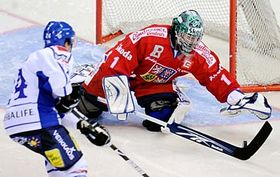 Photo: CTK The Czech Republic can perhaps go to the imminent ice hockey World Championships in Switzerland with some confidence, after a rather impressive performance in their final match at the Czech Hockey Games in Liberec at the weekend; the Czechs came second in the tournament (though were still last in the four-nation Euro Hockey Tour) after beating Finland 4:3 in overtime on Sunday. The winning goal came from forward Jakub Klepiš after an assist from Jaromír Jágr. The former told Czech Television the signs were good.

“I think we showed some good hockey. All the guys wanted to win, they all battled…the goaltenders played well. The strength is here, so we’ll see how it goes. The team will be reinforced by players from the NHL and the Russian league, so we’ll see what happens.”

The Czech Republic’s opening game at the World Championships is against Denmark on Saturday evening.

Hašek (44) reported to be close to joining Pardubice 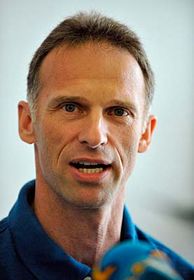 Dominik Hašek, photo: CTK The great Czech goaltender Dominik Hašek is reported to be very close to signing with his home town club, Pardubice, after rejecting a relatively lucrative offer from Sparta Prague. Hašek is 44 years old and has twice retired from the NHL. 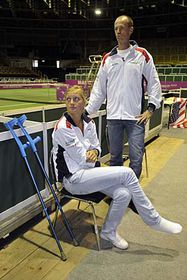 Petra Kvitová, photo: CTK The Czech Republic’s women are preparing to take on the USA in the semi-finals of tennis’s Fed Cup in Brno next weekend. There are worries in the Czech camp that Petra Kvitová will not be fit in time for the tie, after she fell in the gym last week and injured her ankle.

“My ankle was three times bigger than usual, which was a first for me. I thought about many things – the season, the Fed Cup – and it wasn’t a good feeling. But it’s getting better by the day, and we’ll see what the doctors can do. I hope it’ll be OK.” 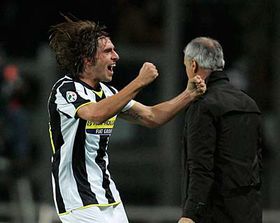 Zdeněk Grygera, photo: CTK Czech football defender Zdeněk Grygera scored in injury time to give Juventus a 1:1 draw with Inter Milan on Sunday, at least slowing the Italian champions’ progress to another title. Meanwhile, Grygera’s international team-mate Petr Čech reached the final of England’s FA Cup with Chelsea after they beat Arsenal 2:1 on Saturday. However, the goalkeeper has some way to go to restoring his reputation after a nightmare week in which he conceded eight goals in three games.

Sparta close in on second spot, while Bohemians 1905 pull away in second division 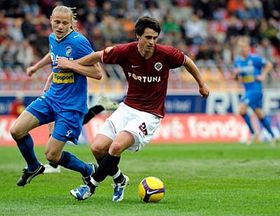 Photo: CTK While Slavia (who play Kladno after the recording of this show) are running away with the Czech league, Sparta cemented their hold on the runner-ups spot with a 2:0 win over Plzeň at the weekend. Liberec are third after beating local rivals Jablonec 1:0. In the second division, Bohemians 1905 took a big step towards returning to the top flight with a 2:0 win over their nearest rivals Časlav; that puts the Prague club eight points clear with seven games left to play.