In Sports News this Monday: after two defeats, the Czechs bounce back at the ice hockey world championships, reaching the quarter-finals with a whopping 8:0 win over Slovakia and overcoming Belarus 3:0; upcoming Czech cyclist Roman Kreuziger (23) wins the Tour of Romandie; and after a run of five games without a win, Slavia Prague’s lead at the top of the Czech football league is shrinking. 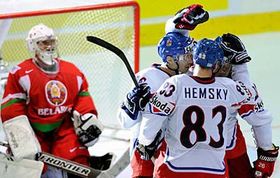 Photo: CTK After losing 3:4 to Finland and 1:5 to Canada, the Czech Republic bounced back in style at the ice hockey world championships in Switzerland at the weekend. On Saturday they made sure of a place in the quarter-finals with an absolute trouncing of Slovakia. In fact, their 8:0 defeat was the worst ever suffered by the Czechs’ former federal brethren. Among the scorers in that game was Patrik Eliáš, who had flown in from the US just hours previously.

On Sunday the Czech Republic faced Belarus in a game they needed to win to avoid meeting the fancied Russians in the quarter-finals. While the Czech team have been much praised for their attacking prowess, they also managed to achieve a second shut-out in a row in that game, as they put three goals past the Belarusians without reply. Centre Josef Vašíček said despite the fact the Czechs had already reached the next stage, the Belarus game was still important.

“We were already in but it meant a lot. We were playing for third place in our group. It was a difficult game and they were coming off a really strong game last night [a 2:1 win over Finland] and…we knew we had to play our best, and we did.”

The Czech Republic are now likely to face Sweden for a place in the semi-finals at the hockey world championships. Roman Kreuziger, photo: CTK The Czech cyclist Roman Kreuziger has taken another major step forward in his career after winning one of the sport’s most prestigious races, the six-day Tour of Romandie. At only 23, Kreuziger – a stage race specialist – also has a win in last year’s Tour of Switzerland under his belt, as well as a runner-up’s medal from last year’s Tour of Romandie. The Liquigas rider will now be setting his sights on improving on the 12th place he achieved in last year’s Tour de France. Could we be seeing the emergence of a truly great Czech cyclist? 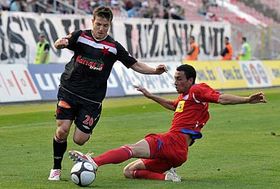 Photo: CTK Czech football league leaders Slavia Prague have dropped more points after losing 1:0 away to Brno on Sunday evening. Slavia have been having trouble scoring since losing Tomáš Necid in the winter break, and have now gone five games without a win. What once looked like an unassailable lead could be reduced to only five points if Sparta Prague can make the most of home advantage over Baník Ostrava on Monday evening, after the recording of this show. In any case, the remaining four rounds of the season should be rather more exciting than seemed likely just a few weeks ago.