Chelsea goalkeeper Petr Čech has expressed disappointment and denied charges again put forward by former Blues coach Luiz Felipe Scolari that he (along with others) had a role in the coach’s dismissal in February. Last week, Scolari cited player influence as playing a key role in his axing from Chelsea. Along with Čech, he named players Michael Ballack and Didier Drogba. In the latest edition of the Czech daily Sport, Čech responded by saying the accusation he was somehow involved was simply untrue. The goalkeeper admits being at odds with Scolari over some of his methods but maintains he respected the coach throughout his tenure and had nothing to do with the team's decision. Karel Bruckner, photo: Ondřej Prokop, ČRo Questions remain over who will lead the Czech national football team now that Slavia coach Karel Jarolím has turned down the opportunity. Jarolím was a favourite of new Czech FA head Ivan Hašek, but made clear he would be unable to divide his time between the national squad and the Czech premier league. It is thought that Hašek may present another solution, offering a kind of ‘triumvirate’ in which he would run the team together with Michal Bílek and former national team coach Karel Bruckner. An announcement is expected some time on Monday. Mr Bílek declined to comment the situation but Karel Bruckner has admitted to being in close contact with the FA head. Whoever takes over the national squad will have their work cut out for them: the Czechs have a slim chance of making it to World Cup, which takes place in 2010, and whoever is the new coach will have to try and turn the Czechs’ fortunes around.

Disgraced Czech striker Roman Bednář – caught on tape in May buying the illegal drugs marijuana and cocaine for hundreds of pounds – may be given a second chance with West Bromwich. The 26-year-old remains suspended by the club as he awaits the verdict of an FA probe, but the club has made clear it is standing by its player. Before he returns, the player may have to pay a hefty fine. He could also receive a year-long ban, which would, however, be back-dated for the period the player has already spent in suspension. Bednář has not denied buying the drugs, but maintained he was acquiring them for a friend. 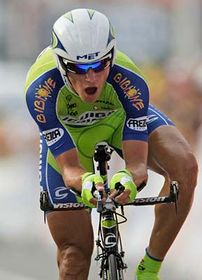 Roman Kreuziger, photo: CTK Young Czech cycling star Roman Kreuziger, who rides for Liquigas, is currently in 12th spot after three stages in the Tour de France - although he has lost the white jersey for best rider under the age of 25 to German rider Martin, and slipped from an earlier 7th place standing. Last year, Kreuziger finished 12th overall in the Tour; he has made clear he is hoping to break the top 10 this time around; since it is early days in the gruelling race, the rider should have plenty opportunity to shine. Currently, he is 1:13 minutes off the overall leader. In the third stage on Monday, Cavendish (and fellow Team Columbia riders) led a break-away group roughly 30 kilometres before the finish, with Cavendish taking the win.