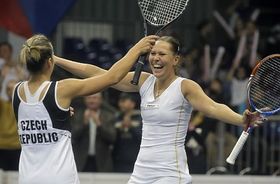 Květa Peschkeová, Lucie Hradecká (right), photo: CTK The Czech women’s tennis team has reached the Fed Cup semi-finals after beating Germany 3:2 in the city of Brno at the weekend. The match kicked off on Saturday with Czech number one Lucie Šafářová losing to Germany’s number two Anna-Lena Groenefeld 6:2 and 6:2. The Czechs however tied the event with Petra Kvitová beating the German Andrea Petkovič 6:4, 6:4 later that day. Sunday saw the first Fed Cup appearance by Czech Lucie Hradecká who became the unlikely hero for the Czechs as she successfully beat Petkovič 6:1 and 7:6. The Germans tied the game again but Hradecká and Peschkeová secured the decisive point in doubles, beating Germany’s Groenefeld and Malek 6:1 and 6:3. Lucie Hradecká then described her outstanding Fed Cup debut.

“It’s a great success and I value it as much as a tournament win. When you do so well in your first appearance, it gives a boost to your career. I was nervous but I really tried to get things under control, and I enjoyed the match very much.”

In the Fed Cup semi-finals, the Czech Republic will face Italy in April for a berth in the final.

The Czech national football team will face current champions Spain as well as Scotland, Lithuania and Liechtenstein in Euro 2012 qualification. At Sunday’s draw in Warsaw, the Czech team was seeded in the second group based on UEFA national team coefficient rankings, and ended up in one of the five-member groups. Czech national team coach Michal Bílek had been hoping to avoid the Spaniards in the qualification, while the head of the Czech FA, Ivan Hašek, was not quite sure whether Sunday’s draw was good or bad news.

“There were worse groups than this. We are certainly glad that we are in a five-member group; on the other hand, we‘ll play currently the world’s best team, Spain, which will make it difficult for us. But it’s really difficult right now to say whether the draw was good or not. You know what happened last time, when people said the draw was great and we failed. So I’m realistic about it, and the decision will be made on the pitch.”

Czech goalkeeper Petr Čech, of Chelsea FC, performed some great saves in the city derby against Arsenal in UK’s Premier League in London on Sunday. In the first half, Čech successfully blocked a volley from striker Andrei Arshavin’s, and he saved a free kick by Francesco Fabregas after the break, helping his team to achieve a 2:0 win thanks to two early strikes by Didier Drogba. Chelsea now tops the premiership table, two points ahead of Manchester United.

Hockey star Jágr stops at home before heading to Vancouver

Star Czech hockey player Jaromír Jágr arrived in the Czech Republic on Monday morning from Russia for a few days’ rest before heading to the Winter Olympics in Vancouver. The forward for Russia’s Omsk came back amidst concerns about the state of his health, as he was pulled out of a game on Friday with the Russian press reporting a possible groin injury. Jaromír Jágr told reporters at Prague airport however that he had already recovered from what was only a minor stomach virus. 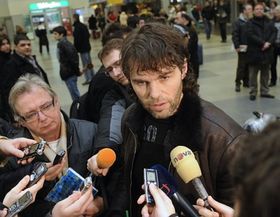 Jaromír Jágr, photo: CTK “It was quick to come and quick to go; other players of the team had it too. I’m now going to take a rest; the last month or so was demanding as we had a game every other day, with all the travelling, and then the All-Star game. The last week was exhausting. So I’ll rest for a day, than go training at Kladno, and then there are six days left before the first game in the Olympics.”

At Vancouver, the Czech Republic will face Slovakia on February 18, followed by Latvia two days later. The Czechs will then conclude the tournament’s group stage with a game against one of the strong favourites, Russia, on February 21.