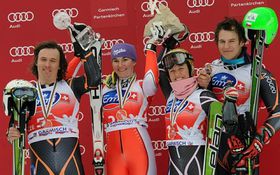 Ondřej Bank, Šárka Záhrobská, Lucie Hrstková, Kryštof Krýzl (left to right), photo: CTK Czech downhill skiers clinched a sensational win in the World Cup Nation Teams event in Garmisch-Partenkirchen, Germany on Sunday – just edging fellow finalists Switzerland. The race, a parallel slalom format, sees four skiers compete per team. For the Czechs that meant Šárka Záhrobská, Lucie Hrstková, Ondřej Bank and Kryštof Krýzl. After four races, the Czechs and the Swiss were tied at 2:2, but Ondřej Bank, who was undefeated in the heats, secured the title by posting the fastest overall time (the official tiebreaker). On the way to the win, the Czech Republic had to defeat not only Switzerland but also Austria and the USA. 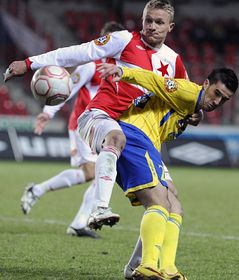 Slavia - Teplice, photo: CTK In the 19th round of the Gambrinus Liga on Sunday Sparta Prague came close to losing to Mladá Boleslav but in the final minutes managed to turn around the game. Sparta were trailing 1:0 but got back in it in the 86th minute on a corner kick. The ball was sent to the far post where Kušnír capitalised. In the 92nd minute, Libor Sionko then got the ball in the penalty area and was able to send it under the crossbar. The win means Sparta remain in the running for this year’s league title, a point off leaders Teplice, who drew 0:0 with Slavia in their weekend match-up. That game saw three players injured, including Slavia forward Riste Naumov, who suffered a horrific leg break after clashing with Teplice’s Martin Klein. With a double fracture to his leg, the Macedonian player could be out of action for up to one year. 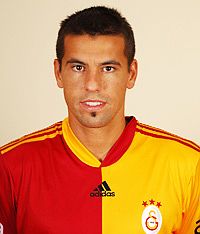 Milan Baroš Czech striker Milan Baroš, out since last October due to injury, returned to Galatasaray at the weekend and got off to a winning start, scoring once to help the Istanbul team defeat Ankaragucu by a score of 3:0. The goal is Baroš’s 17th this season counting six in the Turkish league, six for the Czech national team, and five in European action. The win put Galatasaray atop the Turkish league standings. Slavia - Litvínov, photo: CTK Slavia and Liberec have become the last two of eight teams to reach the playoff quarterfinals of the Czech hockey league. Slavia won a grind of a final match in their best of five series against Litvínov, winning 5:3. The game saw the gloves come off between Litvínov enforcer Roman Vopat and Slavia’s Jiří Vašíček; the latter came away heavily bloodied. In the other series to reach the quarterfinals, Liberec embarrassed České Budějovice 9:1 to edge their rivals in the best-of-five. 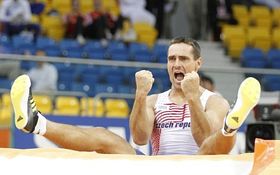 Roman Šebrle, photo: CTK Czech athletes posted disappointing results at the World Indoor Athletic championships in Doha. Roman Šebrle finished 5th in heptathlon: the 36-year-old former Olympic and world champion was slower in both sprints, but posted good performances in the shot put, the high jump and the pole vault. Šebrle, who is the current decathlon world record holder, said he had not expected to do all that well given recent injury. Brian Clay, from the United States, successfully defended his title and took gold. Czech athletes also finished outside the medals in other events, including the women’s pole vault and the women’s 400-metre relay.