In Sports News this Monday: Martina Sáblíková crowns a dream season with victory at the World Allround Speed Skating Championships, though her coach says he may quit if the state doesn’t put more money into the sport; Lukáš Bauer also ends his season well, coming second in the cross-country skiing World Cup; Czech football is hit by allegations of match-fixing, though questions are asked about the timing of the controversy; and Sparta Prague go top of the league after they beat Olomouc and Teplice are beaten by Brno. 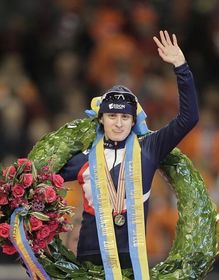 Martina Sáblíková, photo: CTK Martina Sáblíková ended what has been a dream season on a high on Sunday, when she took the women’s overall title at the World Allround Speed Skating Championships at Heerenveen in the Netherlands. Sáblíková, who is 22, finished third in the 1500 metres, but won her favourite event, the 5000 metres, to finish less than half a second ahead of her nearest rival across four events. That win made it two world allround championship titles in a row for Sáblíková, who is also world, European and double Olympic champion, as well as the world record holder in the 5000m.

The Czech’s latest success has perhaps been slightly overshadowed by the news that her coach Petr Novák may quit. Novák, who got Sáblíková started in speed skating when she was 11 years old, told the newspaper Sport that he will consider his future if the amount of money the state puts into speed skating isn’t increased. Lukáš Bauer, Petter Northug, Marcus Hellner (left to right), photo: CTK Cross-country skier Lukáš Bauer finished second in this year’s season-closing World Cup. First place had already been sealed by Norway’s Petter Northug before the final race, and the Czech did well to hold on to second spot overall with a ninth place finish in the 15 kilometre freestyle in Sweden’s Falun on Sunday. Bauer, who was suffering from illness for two months earlier in the season, told reporters he regarded coming second in the World Cup as a huge success. 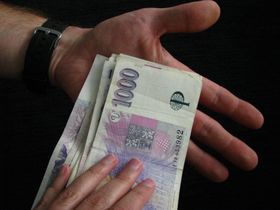 The Czech soccer league has been hit by allegations of match-fixing in a game at the end of last season. The owner of Bohemians Praha, Karel Kapr, says Sigma Olomouc’s goalkeeper Petr Dobrisz offered and later paid his players CZK 300,000 (USD 16,000) to lose the match (which ended 3:0), ensuring Olomouc got into the qualifying stages of the Europa League. Olomouc players and officials have strenuously denied the allegations, which are being investigated by the police. Meanwhile, questions are being asked about why the whole thing has blown up now, so long after the alleged bribery took place. 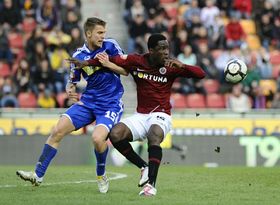 Sparta - Olomouc, photo: CTK Sparta Prague have gone top of the league, after a 4:0 home win over Olomouc, with two of those goals coming from Libor Sionko, who has 39 caps for the Czech Republic. That win meant Sparta overtook Teplice after the latter were beaten 1:0 at home by Brno. Jablonec, who beat Příbram 2:1 away, are third.