In Sports News this Monday: there are upsets in the playoffs of ice hockey’s Extraliga, with the clubs who came first and second in the regular season both exiting in the quarter-finals for the first time ever; Sparta Prague pull ahead in the Czech soccer league with a 3:0 win over Brno; Vendula Frintová takes a top triathlon prize in Australia; and former European footballer of the year Pavel Nedvěd takes part in the Prague Half Marathon.

Favourites Plzeň knocked out of Extraliga playoffs at quarter-final stage 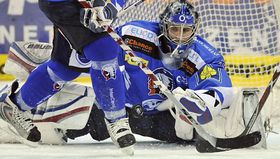 Liberec - Plzeň, photo: CTK There have been some dramatic results in this season’s playoffs in Czech ice hockey’s Extraliga, with the teams who placed first and second in the regular season both exiting in the quarter-finals for the first time ever. Plzeň, who ended the regular season 10 points in front, were knocked out by Liberec, who took the last playoffs berth after coming eighth. After the 7:2 defeat on Saturday that sealed Liberec’s place in the semis, Plzeň captain Martin Straka placed the blame on his own shoulders. Straka said he had played awfully, unlike his opposite number Petr Nedvěd, who he credited with powering Liberec into the last four.

That upset was mirrored in the tie between Zlín and Slavia Prague, with Zlín, who finished second, eliminated by a Slavia side which had struggled in the regular season.

Slavia will now play either Vítkovice or Sparta Prague in the semi-finals; their quarter-final was tied at 3:3 ahead of the final game in the series, which is due to take place on Monday evening, after the recording of this show. The other semi-final pits Liberec against Pardubice, with both series set to kick off later this week.

Sparta pull ahead as Teplice drop points at Bohemians 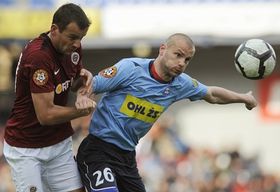 Sparta Prague - Brno, photo: CTK Sparta Prague pulled ahead at the top of the Czech football league after a convincing 3:0 victory over Brno in the capital on Saturday. That win wasn’t without cost, though, as Sparta defenders Erich Brabec and Lukáš Hejda were both taken off injured. Teplice, who had been neck and neck with Sparta, fell behind after an own goal cost them two points in a game against Bohemians 1905 that ended 1:1. 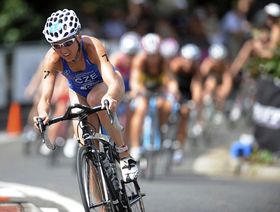 Vendula Frintová, photo: CTK Vendula Frintová has become the first Czech woman to win an International Triathlon Union World Cup event, after taking gold in the Mooloolaba triathlon in Australia on Sunday in a time of two hours, three minutes and 16 seconds. Frintová had been trailing by over a minute and a half at the end of the cycle leg, but produced a strong run to finish first. 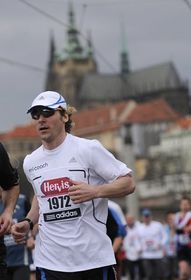 Pavel Nedvěd, photo: CTK The retired Czech football star Pavel Nedvěd was among 8,500 participants in the Prague Half Marathon on Saturday. The 2003 European footballer of the year completed the race in just over one hour 47 minutes, telling reporters afterwards it had been harder than any soccer game. But Nedvěd won’t be able to put his feet up just yet: the 37-year-old is reportedly planning to take part in the full Prague Marathon on the second Sunday in May.