In Sports News: sparks fly in the Czech football league as Bohemians Praha refuse at the last minute to play Bohemians 1905 in a first division game; Baník Ostrava go top, but for how long?; Milan Baroš bags a hat-trick for Galatasaray in his first start since October; and it’s Pardubice vs Vítkovice in the Extraliga playoffs finals.

Photo: CTK The issue of Czech soccer’s top flight featuring two clubs with an extremely similar name and strip erupted at the weekend into the biggest scandal to hit the Gambrinus Liga in some time. The background is rather complicated but basically runs like this. A tiny club from the outskirts of Prague called Střížkov bought the name Bohemians Praha five years ago after the original Bohemians went bankrupt. Meantime, fans of the original Bohemians got together and funded its revival at its traditional stadium in Prague’s Vršovice district under the name Bohemians 1905.

This led to bitter rivalry and a long-running dispute over the name, which was brought to a head on Saturday when Bohemians Praha refused at the last minute to take part in a league game at Bohemians 1905, a game that was due to be shown live on Czech Television.

Bohemians Praha are demanding that the matter of the name be resolved by European football’s governing body UEFA. But the Czech football association say both clubs are league members and there is nothing to resolve. What’s more, the FA is expected to come down hard on Bohemians Praha, with likely sanctions including a large fine for the bottom-of-the-table club and Bohemians 1905 being awarded a 3:0 win. Baník Ostrava - Slovácko, photo: CTK As for games that were actually played, Baník Ostrava went top of the league after a 3:2 home win over Slovácko, while third placed Jablonec beat Mladá Boleslav 2:1 away. However, Sparta can move from second back to first if they beat Slavia in the big Prague derby on Monday evening, after the recording of this show.

Baroš bags three in first start for Galatasaray since October Milan Baroš Further afield, Milan Baroš made a big impression in his first start for Turkish club Galatasaray since suffering a foot injury in October: the Czech striker scored two headed goals in 10 minutes before rounding of a hat-trick with a fine individual effort in Gala’s 6:1 victory over Diyarbakirspor on Sunday. 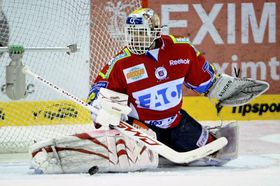 Dominik Hašek, photo: CTK The line-up for the finals of the ice hockey Extraliga playoffs has been decided. Pardubice, featuring the great Dominik Hašek in goal, needed only four games to see off Liberec, while Vítkovice beat Slavia Prague 4:1. The fact both semi-finals ended so quickly led Czech Television, which is broadcasting the playoffs, to ask the clubs to start the finals early. However, both Pardubice and Vítkovice refused and the final series begins, as originally scheduled, on Saturday.