In Sports News this Monday: the Czech women’s tennis team are trounced by Italy in the Fed Cup semi-finals; Patrik Eliáš and Petr Sýkora pull out of the Czech squad for next month’s ice hockey World Championship, while there are calls to call up Dominik Hašek (45); and reports Tomáš Rosický could return to the Bundesliga are denied. Petra Kvitová, photo: CTK The Czech women’s tennis team suffered one of their biggest Fed Cup drubbings ever at the weekend, failing to take even a single set against Italy in a semi-finals clash. The defending champions, playing on their preferred surface clay and in front of a home crowd in Rome, were always likely to be tough opponents. And so it proved. The Italians dispatched Lucie Hradecká and Lucie Šafářová in the first two singles rubbers, giving the Czech women a huge mountain to climb on Sunday in the best-of-five tie. But any lingering hopes the Czechs had of reaching the final were quickly extinguished when Flavia Pennetta beat Petra Kvitová 7-6 6-2 early on Sunday afternoon, giving Italy an unassailable 3:0 lead. The hosts then compounded the visitors’ misery by winning the last two matches to take the tie 5:0. Czech captain Petr Pála had this to say afterwards:

“Losing 5:0 isn’t pleasant. They gave us a bit of a lesson in how to play on clay, in terms of movement and how to play on that surface. Basically we expected they would play as well as they did: our girls would really have had to play at their absolute best in order for the matches to be more balanced.”

Eliáš and Sýkora pull out of squad for hockey worlds 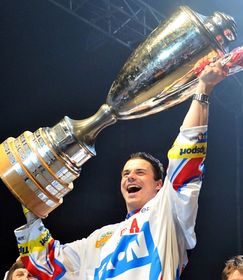 Petr Sýkora, photo: CTK There was bad news for Czech ice hockey coach Vladimír Růžička on Sunday; Patrik Eliáš, who captained the side at the Olympics, had said before the NHL playoffs that he would play in next month’s World Championship in Germany, if his club New Jersey Devils were knocked out. That has come to pass, but Eliáš now says he won’t be going to Germany for personal reasons, adding his name to a growing list of NHL players unavailable for Germany.

Meanwhile, Petr Sýkora, one of the pillars of the Pardubice team that won the Czech Extraliga last week, has also cried off, citing family reasons. By the way, Pardubice’s success has led to a heated debate in Czech hockey circles over whether Růžička should change his mind and pick goaltender Dominik Hašek, who is 45, for the squad for the World Championship.

UK media reports that Czech soccer star Tomáš Rosický could be leaving Arsenal for either his former club Borussia Dortmund or another Bundesliga side Stuttgart have been denied. Rosický’s brother Jiří, who works for the midfielder’s agent Pavel Paska, has described the story as “nonsense”. The 29-year-old has been at Arsenal since 2006 and signed a contract extension with the club just a few months ago.