In Sports News this Monday: Tomáš Berdych wins plaudits after reaching his first ever Grand Slam semi-final at the French Open, while Czech pundits are hoping he can maintain that fine form at Wimbledon; doubles specialist Lukáš Dlouhý fails to make it two titles in two years in Paris; and ice hockey goaltender Dominik Hašek joins Spartak Moscow at the age of 45. 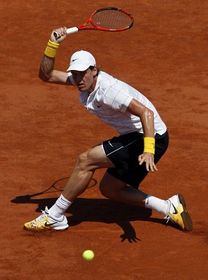 Tomáš Berdych, photo: CTK Tennis player Tomáš Berdych has won lots of plaudits here in the Czech Republic after reaching his first ever Grand Slam semi-final at the French Open. The Czech faced Robin Soderling in Paris on Friday, opening brightly before losing the first set. Then, however, Berdych kept his composure to go 2:1 up on sets, before the Swede regained the upper hand, taking the last two sets to edge out a three-and-a-half-hour thriller 6-3 3-6 5-7 6-3 6-3. At a news conference afterwards, an exhausted looking Berdych identified one possible turning point. 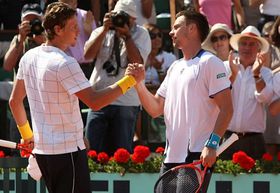 Tomáš Berdych (left), Robin Soderling, photo: CTK Tomáš Berdych has now risen to 13th in the world rankings and is knocking on the door of the top 10. Clay is his least favourite surface and his great run at Roland Garros is being seen by the Czech media as evidence that, at 24, he is finally maturing as a top class player. It has also raised hopes of further success on the grass at Wimbledon, which gets underway in less than two weeks’ time.

Meanwhile, the Czech doubles specialist Lukáš Dlouhý failed to make it two titles in a row at the French Open. He and India’s Leander Paes lost 5-7 2-6 to Daniel Nestor of Canada and Nenad Zimonjic of Serbia in Saturday’s final. 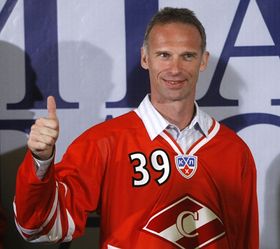 Dominik Hašek, photo: CTK One of the all-time greats of Czech hockey, goaltender Dominik Hašek, has just signed a one-year contract with Spartak Moscow in the Kontinental Hockey League. Hašek recently won the Czech Extraliga title with his hometown team Pardubice at the remarkable age of 45, and ended weeks of speculation when he signed on the dotted line with the Russian club on Monday. The Dominator was one of the most successful goalies in the NHL in the 1990s and early 2000s and was also a member of the Czech team that became legends at home when they won the Olympics in 1998.