In Sports News this Monday: the Czechs enjoy their biggest success in decades at the women’s basketball world championships, finishing second – it’s a miracle, says most valuable player Hana Horáková; the Czech men’s volleyball team make the quarter-finals in their world championships in Italy; and the Czech soccer squad assemble in Prague ahead of a crucial Euro 2012 qualifier against Scotland. Photo: CTK The Czech women’s basketball team have notched up a major achievement by taking silver at the 2010 women’s basketball world championships, which were held here in the Czech Republic. The hosts hadn’t reached the final since 1971, when they took silver while still part of Czechoslovakia, and their best result since then had been bronze four years later.

So even getting to Sunday night’s final can be considered a great success for the Czech Republic. As it turned out, in the end they were no match for the more experienced United States, who took the world title with an 89:69 win at the KV Arena in Karlovy Vary.

The Czech captain Hana Horáková was named most valuable player at the world championships. She was asked by the FIBA official website if it had been a tough game against the Americans. 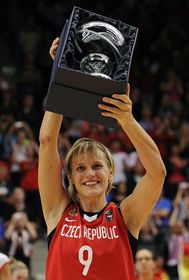 Hana Horáková, photo: CTK “Yes, because they have 12 stars so they can change things around and make substitutions, and everybody played 100 percent. For us it our only final, so we enjoyed it…I think this is a miracle, this is great, and I hope that it is great for small children and that everybody will want to play basketball.”

Diane Taurasi of the USA paid tribute to the hosts, who had sensationally knocked out defending champions Australia in the quarter-finals.

“The Czech Republic is a basketball country. Their players, their fans, their coach was amazing. And they had a fantastic run.” 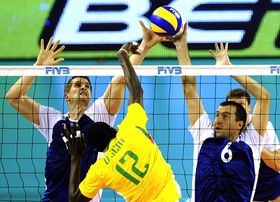 Czech Republic - Cameroon, photo: CTK The Czech Republic’s men’s volleyball players have also been enjoying their best world championships in decades. A 3:0 win over Cameroon on Saturday was their fourth victory in a row and put them into the quarter-final group stage in Italy's Ancona. Their next test is against the favourites Brazil on Monday evening, after the recording of our programme.

Footballers gather in Prague ahead of key game against Scotland Michal Bílek, photo: CTK The Czech international soccer squad gathered in Prague on Monday ahead of what could be a make-or-break Euro 2012 qualifier against Scotland. World Cup winners Spain are expected to win Group I, leaving the Czechs, Lithuania – who beat them in their opening game – and Scotland scrapping it out for second place and a berth in the playoffs. Failure to win on Friday night could leave Michal Bílek’s team with too much to do to reach the European Championship in Poland and Ukraine in two year’s time. Slavia Praha - Viktoria Plzeň, photo: CTK There is simply no stopping leaders Viktoria Plzeň in the Czech league. Plzeň drew their opening game of the season but since then have won 10 on the trot, the latest a 1:0 victory over struggling Slavia in the capital.

Teplice player Pavel Verbíř reached a remarkable milestone at the weekend, when he made his 500th league appearance for the club. Teplice were in the third division when the midfield grafter first pulled on the yellow jersey, 18 and a half years ago. Verbíř, who turns 38 next month, says this season will be his last.