In Sports News this Monday: Slavia Prague win the Prague ice hockey derby after scoring twice against Sparta in under 30 seconds; young Czech goaltender Ondřej Pavelec appears for Atlanta in his first game since collapsing on the ice earlier this season; soccer league leaders Viktoria Plzeň bounce straight back after their first defeat this term; and cyclo-cross world champion Zdeněk Štybar comes first for the eighth time in nine races this season. 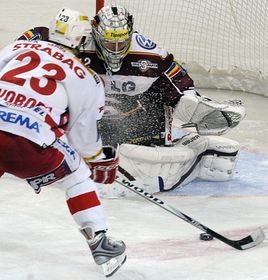 Slavia Prague - Sparta Prague, photo: CTK It’s Slavia Prague’s fans who are enjoying bragging rights at the moment, after their team beat arch rivals Sparta 2:1 in the big Prague ice hockey derby on Sunday. Slavia’s goals came within 30 seconds of one another in the first period; Sparta managed to find the net on 53 minutes, but were unable to go one further and force overtime. The result will have come as a major relief to Slavia, who had gone six matches without a three-point win, and had scored only once in their previous three outings. For Sparta, by contrast, the defeat was a real cold shower; they had begun picking up points after a poor start to the season, but are now back at 13th in the Extraliga table after 17 rounds. Meanwhile, Třinec remain on top, after their seventh win in a row over Kladno. 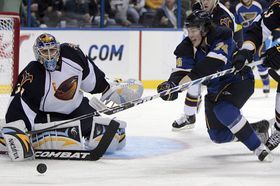 Ondřej Pavelec, photo: CTK In the NHL it was a night to remember for young Czech goaltender Ondřej Pavelec on Sunday when he lined up for Atlanta for the first time since fainting on the ice and suffering concussion earlier in the season. The 23-year-old said he couldn’t wait to get back, and appeared set for the perfect return against St Louis, when Atlanta led for most of the game. However, the Thrashers conceded two goals late on and ended up losing 3:4.

Viktoria Plzeň immediately bounce back after first defeat of season 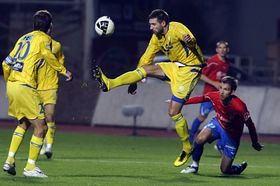 Viktoria Plzeň - Teplice, photo: CTK Czech football league leaders Viktoria Plzeň quickly returned to winning ways on Friday. They had suffered their first defeat of the season the previous weekend, but immediately bounced back with a 4:2 victory over Teplice. Plzeň are nine points ahead of second-placed Sparta Prague, who beat Bohemians 1905 1:0 away thanks to Cameroonian striker Leonard Kweuke. It was Bohemians first defeat at Eden stadium. Getting back to Sparta, they are reported to be asking EUR 14 million for their other African forward, Bony Wilfried of Ivory Coast. 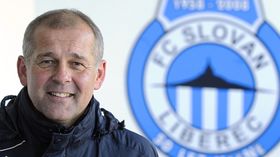 Petr Rada, photo: CTK Manager Petr Rada has returned to the game, a year and a half after being sacked as coach of the Czech national team. Rada’s first match in charge of Slovan Liberec represented the ideal comeback, as they beat Slovácko 1:0 away.

The Czech cyclo-cross world champion Zdeněk Štybar came first in the second race of the Superprestige series in Belgium’s Zonhoven on Sunday, confirming his current dominance of the sport. In fact, Štybar, who is 24, has won eight of the nine races he has entered so far this season, the exception being a memorial race for Radomír Šimůnek in Tábor last Thursday, which was won by the great rider’s son, Radomír Jr.

The Czech Republic’s Kveta Peschke and Slovenian partner Katarina Srebotnik were beaten in the doubles final at the season-ending WTA Championship in Doha on Saturday. They lost 5-7 4-6 to Gisela Dulko and Flavia Pennetta. The Argentine-Italian duo have absolutely dominated the women’s tennis doubles this year, and it was their fourth defeat of Peschke and Srebotnik in 2010.