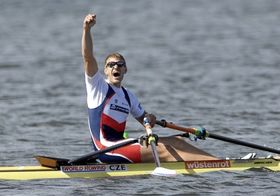 Ondřej Synek, photo: CTK Czech rower Ondřej Synek hadn’t lost a single final this season and came to the world rowing championships arguably the odds-on favourite; nevertheless, to win gold for the first time the Czech was faced with a daunting task: to beat four-time winner as well defending champion Mahe Drysdale in front of a New Zealand home crowd at Lake Karapiro. He succeeded. The Czech moved into the lead after the first 750 metres and held it for the remaining 1,250 for the win in the men’s single sculls. His time was 6m 47.49s. Drysdale came second, 1.93 seconds behind the winner, while British sculler Alan Campbell was third. The gold is an historic win for Czech rowing and puts Ondřej Synek in a formidable position in the run-up to the 2012 Olympics in London. 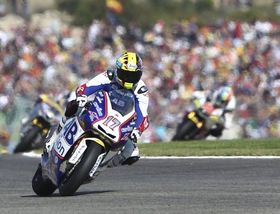 Karel Abraham, photo: CTK Czech motoracing rider Karel Abraham claimed his first ever GP win in the Moto2 at the Valencia MotoGP round at the weekend. The race saw a sensational finale with five riders including Iannone – who led half the race – and world champion Elias vying for the win. A crash in the final lap, though, put two riders out and Iannone himself was lucky not to fall. The incident allowed Abraham to move from fourth place to first. Riding in his sixth grand prix season, the Czech crossed the line just 0.522sec in front of Iannone for the win. 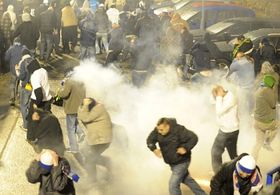 Photo: CTK Plzeň have continued in unprecedented fashion in the top Czech football league, winning 2:0 over Baník Ostrava on Sunday. Plzeň has racked up 40 points so far in the first 15 rounds of the season – a feat not matched by any other club in Czech football history. With a record of 13 wins, one draw and one loss, Viktoria Plzeň are in front of their nearest rivals Olomouc and third-place Sparta Prague by 12 points.

But their win on Sunday was not without incident: the match was stopped for around twenty minutes due to hooligan violence outside the stadium gates. Hooligans attacked the police on site throwing bottles and stones, injuring six. Twelve people were arrested and four later charged. To regain control in the incident police resorted to using tear gas, which due to the wind, wafted onto the playing field, leading to the delay.

Sources say many of the hooligans were known well-known to law enforcement officials – extremists who came out for one thing and one thing only: not to clash with Plzeň fans but directly with the police.

Striker Ferdinand Torres scored twice against Petr Čech to help Liverpool beat Premiere League leader Chelsea 2:0 on Sunday. The Blues looked lacklustre against the resurgent Liverpool side and quickly fell behind: Torres first scored in the 11th minute on a through ball from Dirk Kuyt and scored again just before half time, curling a masterful shot past the star Czech goalie. The defeat leaves Chelsea at the top of the table but only two points ahead of Manchester United.

In the Czech hockey league, Liberec won their third-straight on home ice, downing Brno 3:1 on Sunday. The White Tigers fell behind in the 42nd minute on a goal by Balej, but were able to turn the match around on two goals from Podkonický and one from Tomáš Kliment, who scored the winner with four minutes remaining.