In Sports News this Monday: Six months after being crowned world champions, the Czech Republic’s ice hockey players fail to take a single point in their first tournament of the new season; the gap at the top of the Czech football league narrows, after leaders Plzeň are held to a draw and Sparta win; Olympic champion speed skater Sáblíková is for once halted by illness; and warm weather brings a high turnout for Prague’s Velká Kunratická cross country race. 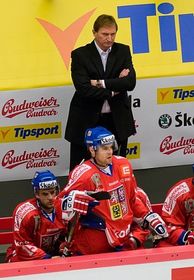 Alois Hadamczik, photo: CTK Six months ago the Czech Republic’s ice hockey team were celebrating, having been crowned world champions for the sixth time since the establishment of the state in 1993. But the Czechs returned to earth with quite a land at the weekend, when they lost all three of their games at the Karjala Tournament, without taking a single point. It was a nightmare start to Alois Hadamczik’s second stint as Czech national team coach, as he saw his charges lose 3:4 to Sweden, 0:5 to hosts Finland and 1:3 to Russia. Following the last of those games, Hadamczik said the team had simply not followed his instructions, particularly at the back.

“There has to be discipline in our system. If you don’t have discipline, it can’t work. What I’ve learned is that next time we have the players together there will be clear discipline, clear order. We had one training session focused on defence and some players just did their own thing…That’s not how the defensive system will be, it can’t work that way.” 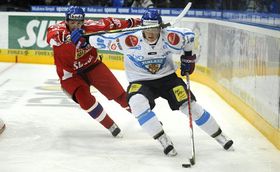 Czech Republic - Finland, photo: CTK One of the few Czech players to win praise for his performances in the Karjala Tournament was goaltender Jakub Štěpánek.

“We have zero points, which in itself is bad. But I think, given how we played, we could have won a couple. The Finns hammered us…With the Russians maybe we could have taken a point, but ‘could have beens’ don’t count for anything. It worked out the way it did, and we have no points.”

Footballers gather for last game of 2010

The Czech Republic’s footballers, meanwhile, have gathered in Prague ahead of their final game of the year, an away friendly against Denmark on Wednesday night. 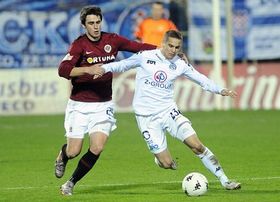 FC Slovácko - Sparta Prague, photo: CTK In the Czech domestic league, Sparta Prague edged closer to Viktoria Plzeň at the weekend, after they beat Slovácko 2:0 and the leaders were held to a 1:1 draw by Slovan Liberec. At one point Plzeň were a remarkable 12 points clear, but the gap has now narrowed to seven. Sigma Olomouc are third, despite losing 3:2 to fourth placed Jablonec on Sunday.

Sáblíková, for once halted by illness, misses first World Cup race of season

The Olympic champion speed skater Martina Sáblíková is famous for competing regardless of health problems: she has raced with a pulled muscle, with a hairline fracture in her arm, and with a fever. But at the weekend the 23-year-old was so ill with intestinal flu that even she couldn’t compete and was forced to pull out of the opening speed skating World Cup event of the season in Heerenveen in the Netherlands. Sáblíková says she hopes to recover in time for the next World Cup meeting in Berlin next weekend. 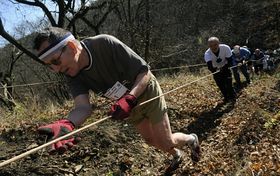 Photo: CTK Record temperatures in Prague on Sunday saw a high turnout for the Velká Kunratická cross country race. Around 3,400 runners took part in the event, which is held at Kunratice on the outskirts of the city and this year took place for the 77th time. As is now traditional, many of the participants were advanced in years. In fact, there is an over 70s category, which was won by Tomáš Kohout; he completed the 3,100-metre race in a time of 13:00:09.