In Sports News this Monday: speed skating champion Sáblíková recovers from illness to reach the World Cup podium for the first time this season; Bauer also leaves his sickbed to perform well in the cross-country skiing World Cup; three Czech ice hockey clubs lose points for fielding unregistered players; and the gap at the top of the soccer league falls to four points on the last weekend before the winter break. 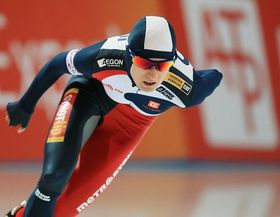 Martina Sáblíková, photo: CTK The Czech double Olympic speed skating champion Martina Sáblíková has reached the podium at a World Cup event for the first time this season, after coming second behind Jilleanne Rookard of the US in the 3000 metres in Berlin. A week previously Sáblíková had missed the opening World Cup meeting of the season when she was laid low with intestinal flu, and after Saturday’s race the 23-year-old was clearly delighted to have got her first points on the board.

“I’m really glad about the result. I’d really like to thank everyone who convinced me that I would manage to get better in a week, and things would work out well. My trainer told me I had it in me to reach the podium today, and that gave me encouragement. I told myself not to give up, and to fight until the end.” 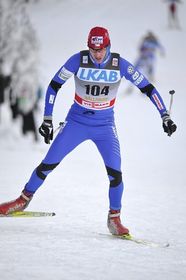 Lukáš Bauer, photo: CTK Cross-country skier Lukáš Bauer also rose from his sickbed to compete at the weekend. Bauer, who is 33, only decided at the last minute to take part in the 15 km free technique in his sport’s first World Cup meeting of the winter, at Sweden’s Gallivare. It was worth his while too, as the Czech came 8th in Sunday’s race, a result he said he was extremely pleased with considering his lack of training.

Czech ice hockey continues to be rocked by one of the biggest affairs in the history of the Extraliga, with three clubs docked points for failure to register players correctly. Mladá Boleslav have been stripped of 22 points, Plzeň 19 and Kladno six, and all are now at the bottom of the table. Announcing the decision on Friday, Extraliga boss Stanislav Šulc said he had decided not to award the deducted points to the clubs against whom the three had fielded unregistered players. 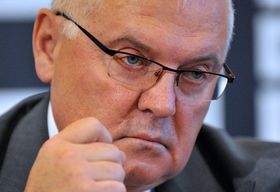 Stanislav Šulc, photo: CTK “Whoever didn’t earn points on the ice gains no advantage. That’s why I decided to not make use of the first alternative, which would have been the clearest and cleanest approach, and most commonly used in hockey. I decided on the least worst, the least painful solution.”

While Kladno have accepted the decision, Mladá Boleslav and Plzeň say they are considering legal action. Meanwhile, the latter’s forward Tomáš Vlasák could face disciplinary action after a stinging verbal attack on Šulc, calling him an arrogant puppet.

Bohemians 1905 - Viktoria Plzeň, photo: CTK The main talking point of the last weekend before the Czech football league’s winter break was the further reduction in Viktoria Plzeň’s lead. Three rounds ago Plzeň were a whopping 12 points in front, and some pundits were backing them to become champions for the first time in the club’s history. However, that lead has faded rapidly, with their latest setback a 1:0 defeat at Bohemians 1905 on Friday.

Second-placed Sparta Prague pounced on the chance to catch up, beating České Budějovice 2:0 with goals from the free-scoring African duo of Leonard Kwueke and Bony Wilfried. That result leaves Sparta just four points off the pace – and sets up an exciting second half of the season when play resumes on the last weekend of February.