In Sports News this Monday: Mladá Boleslav could be expelled from Czech ice hockey’s Extraliga over allegations the club falsified a financial health statement; after collapsing on the ice at the start of the NHL season, Czech goaltender Ondřej Pavelec is now in the form of his life; will Tomáš Rosický leave Arsenal for Aston Villa?; and the Czechs beat Japan 25:1 at the World Floorball Championship. 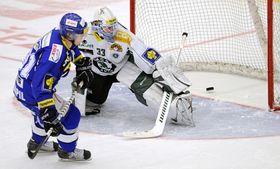 Mladá Boleslav - Kometa Brno, photo: CTK The Czech elite ice hockey league the Extraliga continues to be riven by controversy. Some believed the whole 2010-2011 season had been irreparably damaged when Mladá Boleslav, Plzeň and Kladno were docked points for fielding players who had not been correctly registered. Now it appears there is a real possibility that Mladá Boleslav could be kicked out of the Extraliga altogether. When the club’s owners lodged an appeal on Friday against the points deduction, the league was quick to strike back, saying Mladá Boleslav had signed a false statement at the start of the season declaring they were debt-free: a breach that could see them expelled from the league after a hastily arranged meeting next Monday.

The man who put his signature to the contested statement is Mladá Boleslav’s general manager Cyril Suk. Stanislav Šulc, photo: www.ct24.cz “I would like to say firmly that no falsification of documents has taken place. What we’re talking about here are some unsettled or settled debts towards any entities in the world of hockey…I am convinced that we will be able to back everything up and explain everything at the extraordinary general meeting.”

For his part, the director of the Extraliga, Stanislav Šulc, says the matter appears to be cut and dried.

“I can only base my position on the facts. They are that in September Mladá Boleslav provided a sworn statement that they had no outstanding debts towards hockey entities. And a control that was approved by a general meeting on September 8 found that that was not true. The control was announced in advance, the club provided their books to the economic adviser to the Czech Ice Hockey Association, and this is the result.”

Back on the ice, Třinec went top of the league on Sunday after beating Pardubice 3:0. Vítkovice have fallen to second, following a 3:1 defeat to Litvínov. 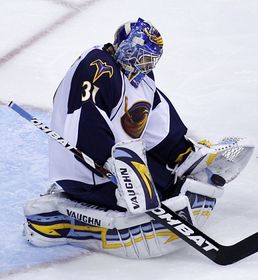 Ondřej Pavelec, photo: CTK Czech goaltender Ondřej Pavelec is going through a real purple patch in the NHL, and is currently second in the league in both successful saves and average goals conceded. Pavelec made headlines after fainting and suffering concussion in Atlanta’s first game of the season. But the 23-year-old has put that health scare firmly behind him, with Saturday’s 3:1 victory over Washington his seventh win in eight starts for Atlanta.

Rosický to leave Arsenal for Villa in transfer window?

There has been speculation in the UK press that Czech national soccer team captain Tomáš Rosický could leave Arsenal for another Premier League club, Aston Villa, during the January transfer window. Rosický, who recently turned 30, frequently warms the Arsenal bench, and himself admits he doesn’t score enough goals. But the Czech media seem to believe he won’t be leaving the Gunners at a time when they head the English league and are involved in three other competitions. 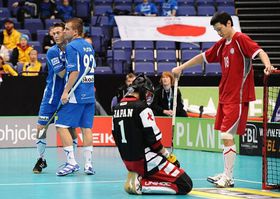 Czech Republic - Japan, photo: CTK The Czech Republic’s floorball team beat Japan by an incredible margin of 25:1 in the opening group stage at the sport’s World Championships in Finland. Their biggest ever victory followed a 16:0 win over Italy. However, the Czechs should face a sterner test against Norway, in a game due to end after the recording of our programme.