Tennis player Petra Kvitová wins the Open GDF SUEZ against the world no. 1, Martina Sáblíková takes bronze at the World Speed Skating Championship in spite of a fall, and saving the worst for last, the Czech ice hockey team finishes in last place at the LG Hockey Games in Stockholm. 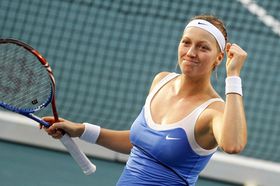 Petra Kvitová, photo: CTK Top of the sports news – good news first – a major win for Czech women’s tennis and first and foremost for Petra Kvitová, who scored a win over world no. 1 Kim Clijsters in the final of the Open GDF SUEZ tournament in Paris on Sunday, ending the top seed’s 12-game winning streak. The two-set, 6:4 6:3 victory was Kvitová’s first against the Belgian and was all the more a surprise as she almost dropped out of the out of the competition early on, having saved a match point to her compatriot Barbora Záhlavová Strýcová in the second round. The 21-year old lefty was happy with her performance in what she agreed was the most important win of her career so far, particularly as she did not feel in top form when she arrived in Paris, hard on the heels of the Czech Republic’s Fed Cup victory over Slovakia in Bratislava: “After Bratislava I was on the one hand extremely happy about how the other girls and I had done but I was also exhausted. I didn’t feel very well when we flew in to Paris and I definitely didn’t show my best in the first round, neither physically nor psychologically. But I’m glad I managed that round and then came the others and then the final.”

Kvitová dedicated the victory to her grandfather, who passed away last week. Martina Sáblíková, photo: CTK On to Calgary, Canada, where Olympic speed skater champion Martina Sáblíková took the bronze medal at the World Allround Speed Skating Championship, in spite of a tumble on the ice that marked the worst mishap in the 23-year-old’s career to date. Sáblíková apparently hit a bump in the middle of the 5km race and fell to the ice, losing all hopes of wrenching the gold from Dutch rival Ireen Wüst. She quickly got back on her feet and managed to finish 15 seconds behind the leader, securing third place after Canada’s Christine Nesbitt. Couch Petr Novák later complained about the doping control Martina Sáblíková was subjected to after her 3,000-metre win on Saturday, saying that the three-hour wait it involved had had a negative impact on her performance. Czech Republic - Russia, photo: CTK So much for victories. The Czech ice hockey team has returned from the LG Hockey Games in Stockholm with a stinging 2:4 defeat at the hands of reigning champions Russia. The Czechs ended the Euro Hockey Tour in last place with only one point, having suffered a heavy loss to Sweden and then to Finland in overtime. After the match, Captain Tomáš Rolinek expressed his disappointment to Czech Radio: “The match today was simply a sleepy one. I don’t know if it was because we’d been playing from 12.00 or because there was a small crowd, but the tempo wasn‘t there. Our weakness in losing the puck in checking was there again, but there were still plenty of chances to score goals, so it could have ended up the other way around.” 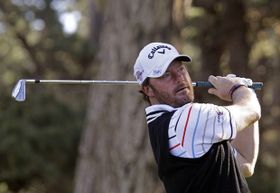 Alex Čejka, photo: CTK In golf, veteran Alex Čejka lost his 10th place standing at the Pebble Beach PGA tournament in California. Two double-bogeys in the last two holes found the 40-year-old in 21st place overall, in spite of a promising beginning where for a moment he was one stroke off the lead. He slipped up at the 13th and 15th holes with bogeys and the 17th and 18th holes cost him even more dearly. The tournament was won by 34-year-old American D.A. Points. 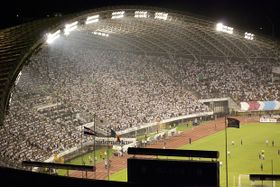 Hajduk Split stadium, photo: Ballota, CC 3.0 license Finally, in football news, Slavia Prague rained on the 100th anniversary parade of the Croatian team Hajduk Split, with a 2:0 win in a warm-up away match on Sunday. The packed stadium and celebratory mood did little to help Hajduk, which Slavia kept at bay for most of the game. Karol Kisel scored 30 minutes into the game and Bosnian Zoran Milutinovič sealed the lead in the second half. No hard feelings though: Czech fans won ovations from the 40-thousand strong crowd when they offered specially choreographed birthday wishes, and the loss did not douse the post-match fireworks or hinder the half-time parachutists. Slavia and Hajdaku enjoy historically close relations, as the Czechs helped getting the club off the ground at the Prague pub U Fleků in 1911.