The Czech national hockey team wins bronze at the Ice Hockey World Championship, downing Russia 7:4 in a thrilling match; football club Viktoria Plzeň are two points away from being crowned league champions; and Czech motorcycle racer Karel Abraham finishes in the top 10 in the France MotoGP. Photo: CTK The Czech Republic and Russia played what was undeniably one of the most entertaining bronze medal matches in recent history at the Ice Hockey World Championships. In Slovakia on Sunday the Czechs’ Roman Červenka, who was benched for much of the previous match, opened the scoring just four minutes in, the first of a hat trick that helped lift the Czechs past an always dangerous Russian team.

Before they got there, though, what a topsy-turvy affair it was.

Russia twice led in the game before the Czechs tied it at 3:3 in the second. After that, the Czechs took control, jumping to a two-goal lead of 5:3, then 6:4, before Plekanec slammed a final goal into Russia’s empty net in the dying seconds. Eleven goals is the most ever scored in the bronze medal game at the World Championships or the Winter Olympics and the Czech team – the gold medal winner from last year – was ecstatic that after a great run it would not be coming home empty-handed. After the game here is how Červenka described the Czech team’s tactics: 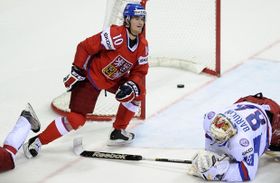 Roman Červenka, Konstantin Barulin, photo: CTK “The Russians play a very open game and it’s all up-and-down and you can’t play them that way and win. We played that way in the first period and we had to change that. In the second period we began to take more control in the neutral zone. That led to the break-aways and to our goals.”

Public broadcaster Czech TV noted that this year’s championship marked the first time since 1985 that two players got hat tricks during the tournament; Červenka’s and one by 39-year-old star player Jaromír Jágr. He scored three in the Czechs’ quarterfinal elimination of the United States. 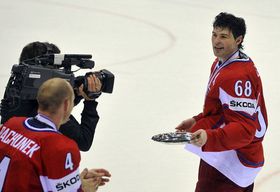 Jaromír Jágr, photo: CTK Members of the team will now almost certainly get a hero’s welcome at Prague Airport and some players, including forward Patrik Eliáš, are already looking forward to next year. There was speculation after a statement by Eliáš after the semi-final defeat against Sweden, that he no longer wanted to play for the national squad, but the player later clarified that he would be happy to play for the team again provided the calendar allows it (in other words if the New Jersey Devils fail to advance in next year’s NHL playoffs).

A final interesting note: the Czechs twice faced Russia in this year’s tournament and won both matches. The Czechs also won last year’s final in Germany against the Russian team. 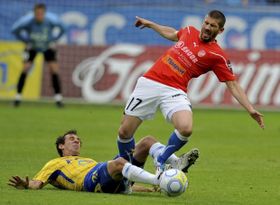 FK Teplice - Viktoria Plzeň, photo: CTK After beating Teplice 1:0 at the weekend, Viktoria Plzeň need only two points in their final two games to be crowned champions in the top domestic football league. In other words, the least they need is two draws. Historically, pundits say, league-leaders usually are able to hold onto their lead into the final games and Plzeň have four more points than defending champions Sparta.

Former players like Horst Siegel very much doubt Plzeň could stumble now: he jokingly told Lidové noviny the players would have to grow beards down to their ankles to trip up and lose their lead. If indeed Plzeň do win the season it will be the first time in the club’s history; the team had never even finished in the top three in the Gambrinus Liga: since the 1993 season it has been Sparta who has won 11 titles, Slavia Prague three, Liberec two, and Baník Ostrava one. 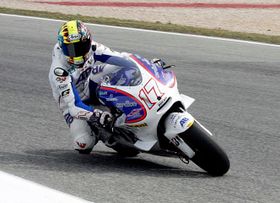 Karel Abraham For the second time this season Czech motorcycle racer Karel Abraham finished in the top 10 in the MotoGP, concretely in tenth spot at the France MotoGP Grand Prix. In the race the rider got off to a good start and eventually vied with four other riders for ninth spot. After Capirossi crashed out of the race, Abraham overtook two of them and finished tenth, just 0,183 seconds ahead of Toni Elias and 0,307 seconds ahead of Alvaro Bautista.