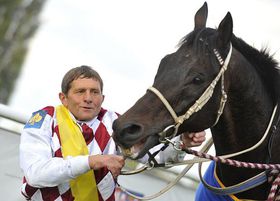 Josef Váňa, photo: CTK Josef Váňa confirmed once again his legendary position in horse racing on Sunday, with his eighth victory in the premier Czech steeplechase, the Velká Pardubická. It was the third consecutive win for the 58-year-old jockey and for 10-year-old Tiumen, a thoroughbred bay horse trained by Váňa himself. While they may well be the greatest duo in Czech racing, victory was by no means guaranteed this year, with Váňa and Tiumen one hoof away from catastrophe on the track’s most difficult obstacle, the Big Taxis fence. Later he told a press conference about the setback:

"I think one of the horse intersected us and so Tiumen was forced to dart left, and on that side was a horse that was having problems with clearing the obstacles, so Tiumen landed right on the edge of the ditch, but he managed to make it, and luckily I didn’t fall. I have to see the video because I’m not entirely sure what happened."

That stumble on that notorious fourth obstacle (a five metre jump that has claimed the lives of 27 horses in the past) put Tiumen at the back of the pack, and Váňa himself suffered a foot injury on the 18th of the 31-obstacle course. But for all that it seems Tiumen’s elder stablemate, Sixteen, running her best race of the season, was the biggest obstacle of all. 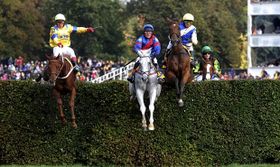 Photo: CTK “We took the 19th jump and he started to languish on me a bit; I thought I might have pushed him too hard. But then we got to the woods and that was his domain, and when we came to the second to last jump and we were in the same place as last year and the year before I thought it might not be too bad. But I could still see that white monster of ours on the right-hand side, jumping perfectly and running like she’d been shot out of a catapult, and I thought we’d never catch her. But Tiumen is simply our best racer on this distance.”

The white monster finished half a length away from a third steeplechase victory of her own. The 11-year-old mare, also trained by Váňa, won the Velká Pardubická in 2007 and 2008, and with this she retires from the track. And as for Josef Váňa, whether he will be back in the saddle next year or not depends on someone else altogether:

"A few days ago I talked to Karel Gott in person, and he said he wanted to come but there was a concert he couldn’t get out of. But he said that if I race next year clear his schedule for the second Sunday in October right away. So if he comes then I’ll try to race, but I can’t guarantee it." 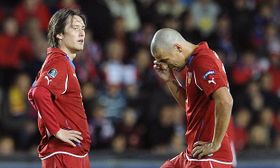 Tomáš Rosický, Milan Baroš, photo: CTK The Czech national football squad played its second-to-last qualifying match in qualifying for next year’s European Championship hosted by Ukraine and Poland. On Friday the team faced Group I leaders Spain – the reigning European and World Champions – at Sparta’s stadium at Letná but the difference in the teams’ play was enormous Spain combined passes and set up opportunities with ease, scoring twice in the first half on goals from Juan Mata and Xabi Alonso. That was also the way the match ended: 2:0, a disappointing but not unexpected result for the Czech squad.

The loss means that the Czech team has now slipped to third spot in Group I., a point behind Scotland who defeated Liechtenstein 1:0 on Saturday. The Czechs are confident they can win or at least draw in Lithuania this Tuesday to regain the initiative and the hopes of a play-off berth. For the Czechs a win or a draw would be enough to finish second in the group unless Scotland shockingly defeat Spain in their final game – a result that would put the European Championship beyond the Czechs reach. 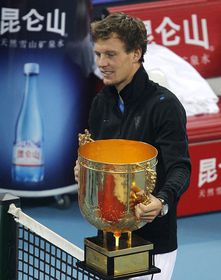 Tomáš Berdych, photo: CTK In tennis a major win for Tomáš Berdych, who took his sixth ever ATP title at the weekend in the China Open. The Cezch was none too impressive going in to Sunday’s finals match in Beijing against 23-year-old Marin Čilić. Berdych’s serve was broken by the Croat in the very first game and he went on to lose the first set, 3:6. In the second set however he was back with a vengeance and quickly regained control, finishing the set 6:4. The third set then was Berdych’s altogether, with six games to Čilić’s one. 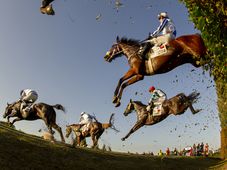