In Sports News: national football team captain Tomáš Rosický apologises for team over “Drulák” incident but squad receives two million crown fine; Liberec, Plzeň keep pressure on league-leaders Sparta with respective wins over Slovácko and Mladá Boleslav; Chelsea and Petr Čech fall 2:1 against Liverpool; in hockey, Sparta defeats Třinec to move to top of the league; Jágr readies for return after suffering minor injury; in tennis, Czech fans will have a chance to root for Tomáš Berdych, taking part in the final event of the season: the ATP World Tour finals in London. 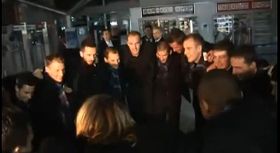 Czech team in Podgorica, Montenegro, photo: Youtube The captain of the national football squad, Tomáš Rosický, apologised at the weekend for an incident involving the team in which players insulted former national squad teammate Radek Drulák. The incident, captured on camera, took place as the team was awaiting departure from Podgorica, Montenegro, after the squad qualified for Euro 2012. In it members of the team sang a vulgar chant referring to Drulák’s “manhood” – a response to the player’s recent criticism of the team and coach Michal Bílek. In his statement, the team captain Rosický admitted that the incident was nothing to be proud of, stressing that emotions had gotten the better of the players following the squad’s victory. The star midfielder also stressed that in no way could sports manager (& former player) Vladimír Šmicer be blamed, suggesting that he, nor anyone else, could have prevented it. Video of the incident was broadcast on Czech TV.

But the Czech FA, under new head Miroslav Pelta, announced on Monday that players as well as the organisational team will be a fined two million crowns over the incident. The FA also announced zero tolerance over any such displays in the future - meaning anyone could be booted off the squad for similar behaviour. Organisers deemed that sports manager Vladimír Šmicer should have stepped in but he will continue in his post. 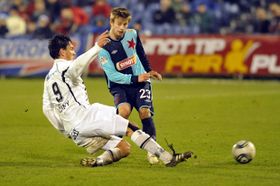 Hradec Králové - Slavia Praha, photo: CTK On the pitch, football’s Slavia under new coach Frantíšek Straka had a three-game winning streak cut short at the weekend by Hradec Králové, who tied 1:1 at home. Slavia’s coach said it was tough to play at their opponent’s stadium and that the team had overall been more aggressive. Slavia remain at 9th spot, Hradec Kralove are 12th. Sparta defeat Trinec to move to top of league

In hockey, in the Czech Extraliga, Sparta declassed defending champions Třinec 5:1, moving up to first spot in the standings. In other action, Litvínov demolished Plzeň 8:2, Zlín downed Karlovy Vary 1:0 and last-place Mladá Boleslav triumphed over Vítkovice 4:1.

NHL: Jágr may play in game against Carolina

Jaromír Jágr Overseas, in the NHL Jaromír Jágr skated on Sunday after suffering a minor supposedly groin injury last week and may be ready to play for the Flyers next game as they face Carolina. General Manager Paul Holmgren confirmed on Sunday that Jágr’s injury was not serious and reiterated how important the 39-year-old Czech was for the team. Philadelphia has had an excellent season so far and tops the Eastern Conference standings despite losing to the Winnipeg Jets on Saturday. 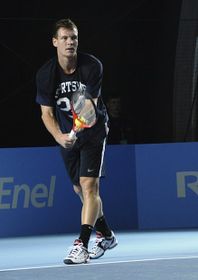 Tomáš Berdych, photo: CTK In tennis, Czech fans will no doubt be rooting for Tomáš Berdych, taking part in the final event of the season: the ATP World Tour finals in London. Berdych, the world no. 7 and one of eight qualifiers in the prestigious tournament, will face a world no.1 Novak Djokovic in the group stage. The match takes place later on Monday and could be tough for Berdych as head-to head he has lost to Djokovic seven times in eight match-ups. Berdych and Djokovic are in Group A, along with David Ferrer and Andy Murray. Players Federer, Nadal, Tsonga and Fish are in Group B. The top two from each group will go on to the semi-finals.