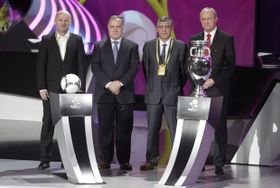 Michal Bílek (left), photo: CTK The UEFA draw on Friday for the European football championships in Poland and Ukraine arguably couldn’t have gone better for the Czech national squad. The team, captained by midfielder Tomáš Rosický, next year will face Russia, co-hosts Poland, as well as Greece in Group A. What’s more, the Czechs will play all three group matches at one location in Wroclaw, Poland – only around 200 kilometres away from the Czech border which is good news for Czech fans. Of the four groups, Group A is widely being considered the “easiest” with each team capable of reaching the next stage.

After Friday’s draw in Kiev here is what the Czech team coach Michal Bílek had to say:

“We have to be happy with the draw: the other groups are comparatively tougher. It’s good that we’ll be playing at only one location so we won’t have to travel. As for our chances, I’ve always said that it is our goal to advance from the group and the draw doesn’t change that. What matters is what happens on the pitch. I think it will be an evenly-matched group.” 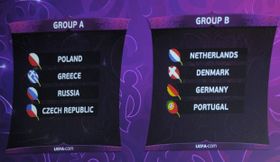 Photo: CTK Bílek’s favourable view was echoed by the players themselves: all cautioned that while anything can happen, the draw was a good one. The Czechs will play their opening game in the tournament against Russia, who they have faced once before (a 3:3 draw at Euro ’96), then play Greece – seeking payback for elimination in the Euro 2004 semi-final. And finally they will face Poland, who will no doubt buoyed by the home fans. Learning the news even former team captain Pavel Nedvěd welcomed the results – suggesting given the atmosphere of home advantage it was a good thing the Czechs were playing Poland last in their group.

Football: Sparta win final game of autumn season, but GM to be replaced Jablonec - Sparta Prague, photo: CTK In news from the Czech domestic football league, Sparta won their final match of the autumn half of the season at the weekend, defeating Jablonec 4:2. Despite the win, big changes are in store at the club: General Manager Josef Chovanec (the former national squad coach) is on his way out to be replaced by Jaroslav Hřebík, coach of the U-19 national squad and the changes could further than that.

The good news for the club is that the team remains atop the standings with 40 points – six ahead of Liberec who were also victorious in the last round, defeating Slavia 3:1. Plzeň, the defending champions, remain third with 30 points, after decisively beating Bohemians 1905 4:1. Ostrava, Olomouc, and Viktoria Žižkov round out the bottom of the league standings. 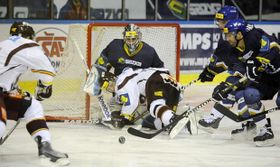 Kladno - Sparta Prague, photo: CTK In hockey, Sparta – undefeated in 10 games – lost to Kladno by a score of 3:1 on Sunday. Liberec, however, were unable to capitalize, downed in a lopsided game against Pardubice by a score of 5:1, slipping to third place. Třinec defeated Kometa by the same score, Plzeň lost to Vítkovice 2:1 in extra time. Ondřej Bank, photo: Filip Jandourek Czech downhill skier Ondřej Bank was left shaking his head after a poor result in his first race of the season: the FIS World Cup Super-G at Beaver Creek, Colorado, where he finished outside the top 30 – a lowly 46th. The racer blamed himself for mistakes and remains is unsure whether to push ahead with the season – this after suffering from an unknown illness in the summer that saw him hospitalised for weeks. During his stay in hospital he shed 15 kilos and only resumed training fairly recently. Bank fell ill after a holiday in Thailand and a series of tests never revealed the exact cause. In his final World Cup race last season Bank finished 13th.