In Sports news today: Czech tennis superstars keep their world rankings ahead of the BNP Paribas Open; FC Viktoria Plzeň’s victory against Sparta sees both it and Liberec eyeing Sparta’s top spot in the Gambrinus Liga; HC Oceláři Třinec have to face PSG Zlín for a fifth time in the ice hockey Extraliga playoffs and Sýkora’s hopes of celebrating in style his 1000th professional match end in disappointment. 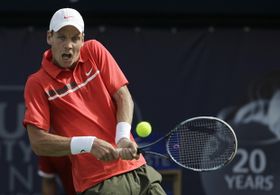 Tomáš Berdych, photo: CTK Two of the most prominent Czech tennis players have held on to their world rankings ahead of the upcoming BNP Paribas Open to be held this week in Indian Wells, California. Twenty-one year-old 2011 Wimbledon winner Petra Kvitová maintains her number 3 ranking, while the twenty-six year-old 2012 Wimbledon finalist Tomáš Berdych remains at number 7. Berdych failed last week to advance beyond the quarter-finals of the Dubai Tennis Championships having reached the semi-finals the previous year, but still maintains a significant points lead in the rankings against world number 8 Mardy Fish. Meanwhile, Kvitová, who has been out of action during most of February with a sprained Achilles heel, is marking her return to professional tennis since competing in the Fed Cup in early February. 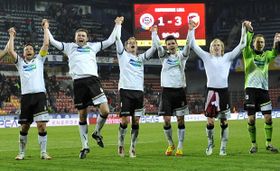 Photo: CTK Saturday saw FC Viktoria Plzeň defeat Sparta 3:1 in an away game that saw the winners renew albeit still distant hopes of emerging as the year’s Gambrinus Liga champions. Currently, Plzeň are in third place with 37 points, while Sparta continue to top the table with 43 points. The home defeat led to Sparta team captain Marek Matějovský trying to rally the spirits of his team, after conceding two goals early in the match, before coming back in the fifteenth minute to make it 2:1. However, the result was sealed with a 59th minute goal by Plzeň. This is the second match in a row in which Sparta have come away without a single league table point, with second place Liberec now just three points away from topping the table. 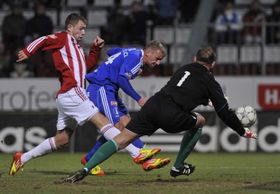 Sigma Olomouc - Viktoria Žižkov, photo: CTK Staying with the Gambrinus Liga, Sigma Olomouc beat Viktoria Žižkov 2:1 with both goals coming from Adam Varadi in the 69th and 75th minutes, while Pavol Jurčo scored one goal for Žižkov in the 81st minute. The match represents Žižkov’s ninth defeat in a row. Meanwhile, Slavia’s woes continued with a 2:3 defeat to FK Mladá Boleslav. Boleslav and Slavia both managed to score two goals before the half-time whistle – with Slavia continuously playing catch-up - but a 71st minute goal by Ondřej Zahustel for Boleslav proved decisive and the team almost secured a fourth goal in the 81st minute with a strike from Jan Chramosta, which ended up being deflected by a Slavia player. 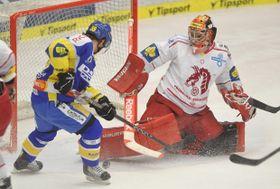 PSG Zlín - HC Oceláři Třinec, photo: CTK HC Oceláři Třinec will play a fifth match against PSG Zlín in the Extraliga ice hockey play-offs after the four match round failed to produce a winner. The fourth match on Sunday saw Zlín defeat Třinec 2:1 meaning that each team has won two matches each. The play-offs consist of a series of four matches played between each of the fourteen contesting teams – two at home and two away. The 2:1 match was the fourth between the two teams, meaning that a fifth decider will be now be required to determine which team advances into the quarter-finals. The decisive match will take place on Tuesday.

Petr Sýkora And staying with the sport, Plzeň-born ice hockey player Petr Sýkora’s hopes of celebrating in style his 1000th professional match ended in disappointment with a 1:0 loss by his NHL team, the New Jersey Devils on Sunday to the New York Islanders. When Sýkora returned to the Devils in 2011 – having previously played for them from 1996-2002 - the player was just 65 matches shy of reaching his 1000th match. In 2010, the player faced hip surgery before playing in Russia and his native Czech Republic again. Speaking after the match, Sýkora said that “It was disappointing the way it ended up,” adding that he “still really enjoyed the game, but obviously I was disappointed with the result.”