In Sports News: Czech hockey club Pardubice win Game 2, evening their semi-final series against Liberec at one apiece; in the NHL, Tomáš Fleischmann scores, earns assist for the Florida Panthers; football club Sparta Prague are a meagre point ahead of second-place Liberec, leaving the season title up-for-grabs; Martina Sablíková wins the 5,000 metres at the World Championships.

Pardubice even their series against Liberec 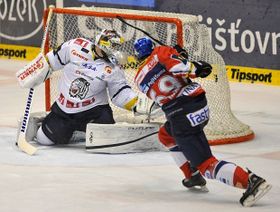 Pardubice - Liberec, photo: CTK The weekend saw play of hockey action with the Tipsport Extraliga semi-finals between Liberec and Pardubice getting underway. The opener was won by Liberec, the first team to have qualified for the semis, by a score of 5:3. In Game 2 of the best-of-seven series, played on Sunday, Pardubice struck back, winning 4:2. Pardubice were lucky to weather the storm in the third period when Liberec were handed several power-plays; overall the game was a hard-hitting affair. The series, tied at two, continues on Wednesday.

In the other semi-final, Plzeň and the surprise of the playoffs so far, Kometa Brno (who eliminated the regular season winners Sparta Prague), play their two first two games on Monday and Tuesday. 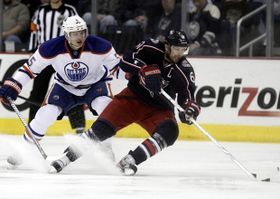 Ladislav Šmíd (left), photo: CTK Overseas, in the NHL on Sunday, Czechs who made their mark included Tomáš Fleischmann, who scored once and earned an assist for the Florida Panthers, who tied the New York Islanders in regulation time, but lost in the penalty shoot-out. In other action, Edmonton Oilers’ defenseman Ladislav Šmíd scored his fifth goal of the season against Columbus. The Oilers won by a score of 6:3. The Florida Panthers, at 87 points, have already booked a berth in the upcoming Stanley Cup playoffs, but Edmonton is a spot-from-last in the Western Conference so no hope there. 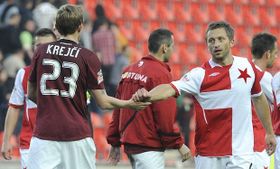 Slavia - Sparta, photo: CTK In football, league-leaders Sparta are in hot water after clinching only a single point at the weekend in a derby against fellow Prague club Slavia. As it happens, Slavia led 1:0 with 16 minutes remaining and threatened to take all three points from the match, but Přikryl, luckily for Sparta, evened the score. He has now scored four goals in as many games. Still, many consider the damage done: the weekend draw leaves Sparta only a point ahead of second-place Liberec, who won easily against Bohemians by a score of 3:0. Liberec and Sparta play each other in two week’s time in a match that could decide who will be crowned the season champions. 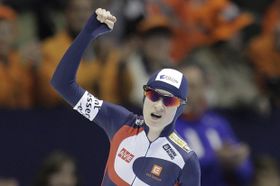 Martina Sáblíková, photo: CTK Speed skater Martina Sáblíková ended the season with a victory in the 5,000 metres on Saturday, earning her second gold at the World Championships in Heerenveen, the Netherlands. Earlier, she clinched the medal in the 3,000 as well. On Saturday took the race in 6:50:46 – almost twenty seconds faster than the nearest competitor, Olga Grafova of Russia, her fastest time of the season.