In Sports News: In football, Sparta Prague stumble in the Gambrinus liga, drawing 2:2 draw against visitors Teplice; Petr Čech and London club Chelsea reach the FA Cup final; Pardubice square series against Kometa Brno in Tipsport Extraliga finals; Jágr earns three assists in win that puts Pittsburgh Penguins on the brink in the first round of the Stanley Cup playoffs. 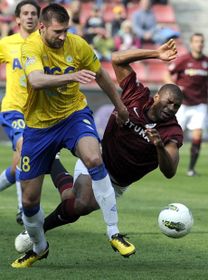 Michal Smejkal (Teplice), Leonard Kweuke (Sparta Prague), photo: CTK In football Sparta Prague stumbled in the Gambrinus liga on Saturday, but were able to salvage one point in a 2:2 draw against visitors Teplice at Letná stadium. Things could have ended far worse: the Prague club was trailing by two goals until the 80th minute when Krejčí found Cameroonian striker Leonard Kweuke who beat goalkeeper Grigar with a shot through the legs. Three minutes later, Kweuke struck again, this time with a beautiful scissor kick that sent the ball to the post. The draw and salvaged point means that Sparta remains atop the league table with 54 points. They are followed by Liberec, in second-place with 52, and defending champions Viktoria Plzeň in third with 50. Plzeň moved up just one point at the weekend in a hugely disappointing 0:0 draw against last-place Viktoria Žizkov. There is no question that was a golden opportunity to jump right into the fight for the season title, one they will no doubt rue. 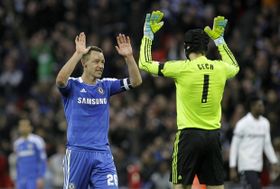 John Terry, Petr Čech, photo: CTK Further afield, in the English Premiership, goalie Petr Čech and London club Chelsea have reached the final of the FA Cup. The side beat Tottenham 5:1 at the weekend to secure a berth in the championship game. The match was not without controversy: referee Martin Atkinson ruled that a shot by Chelsea’s Juan Mata in the 49th minute had crossed the line – a pivotal moment in the game that put Chelsea ahead 2:1. Replays showed the ball did not make it into the net. Tottenham, the better team in the first half, has joined the call for video technology to be introduced to prevent similar mistakes. Regarding recent history, Chelsea won the FA Cup in 2009 and 2010. They will face Liverpool in the championship final. Kometa Brno - Pardubice, photo: CTK The Tipsort Extraliga playoff finals continued at the weekend with Pardubice completing a comeback against this year’s dark horse Kometa Brno to square the series at two-apiece. Kometa got the go-ahead goal from Jozef Balej early in the third period but Pardubice’s Martin Bartek levelled with only a few minutes remaining, sending the game to overtime and eventually a penalty shootout. In the shootout, Kometa coach Zdeněk Vener tried to change things up by unexpectedly sending in Finnish backup goalie Sasu Hovi: the tactic, however, failed in spades, with the goaltender letting in the first two shots. Trvaj, phenomenal for Kometa in the post season, fared no better, allowing a third goal losing Kometa the game. It’s back to the drawing board ahead of Game 5 which takes place on Tuesday. 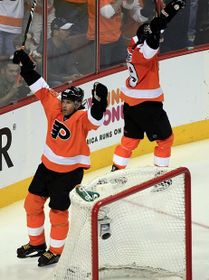 Jaromír Jágr, photo: CTK In the NHL, the Stanley Cup playoffs are well underway with plenty of Czechs continuing to make their mark. Last week, in opening games three – Martin Hanzal, who plays for the Phoenix Coyotes, Jakub Voráček who plays for Philadelphia, and San Jose Sharks Martin Havlát – all got overtime winners in their respective matches. And Czech players have continued their run.

On Sunday: San Jose’s Vladimir Sobotka got a goal in the Sharks’ 3:0 win over St Louis (that series is now tied at 1:1). In other action, Filip Kuba got an assist in the Ottawa Senators’ 3:2 win over the New York Rangers (the series is also tied at one-apiece). But it was 40-year-old Jaromír Jágr who had the greatest impact, earning three assists in Philadelphia’s 8:4 romp over the Pittsburgh Penguins. The Pens are now on the brink of elimination, behind by three games to zero.

In two games in the series the Flyers came back from 3:0 and 3:1 but now are in a very strong position to make it to the second round. Pittsburgh was where Jágr began in the NHL in the 1990s, with whom he won two Stanley Cups.