Czech Republic - Russia, photo: CTK The Czech team has won the Euro Hockey Tour for the first time in 14 years after beating Russia 2:1 in Brno on Sunday in their final appearance at the Kajot Hockey Games, the tour’s final installment. The Czechs in fact finished third in the tournament, and did not win any of the preceding events of the Euro Hockey Tour. However, three second places along with the win over Russia ensured an overall win for the Czech national team.

The Czechs first beat Sweden 5:3 on Thursday, then lost to Finland in the penalty shootout before taking on the Russians on Sunday. The Russian team dominated the first half of the game and went ahead 1:0 early in the second period. But the Czechs’ equalizer came some 14 minutes later with Jakub Petružálek, and Petr Nedvěd then scored the winning goal with just over a minute to go in the second period. Forward Petr Časlava had this to say about his team’s historic victory:

“We thought we could win the match ahead of the world championships, but I think what is most important for us is that it was a huge motivation boost to beat two strong teams: Sweden and Russia, that is what really counts for us.” 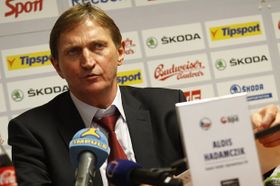 Alois Hadamczik, photo: CTK Staying with hockey, coach of the Czech national team Alois Hadamczik presented on Sunday his picks for this year’s world championships. Among the nominees is the young goalie Petr Mrázek, who delivered an impressive performance at the last U20 World Championships, as well as Liberec captain, the veteran Petr Nedvěd who topped the Czech league’s scoring charts this season.

Surprisingly, left-winger Jiří Tlustý, who plays for the Carolina Hurricanes, will not be able to join the national team. Coach Hadamczik on the Czech representation:

“Jiří Tlustý has been having problems with his shoulders and won’t be able to join the team. We can take 14 forwards to the world championships, and we are taking one extra player, just in case. We imagine that we will have two goalies, six defense players, twelve forwards. We will leave two defense slots and three forwards open, and wait how the second of the NHL playoffs pans out.”

Coach Hadamczik also picked the goalies Jakub Štěpánek from St Petersburg and Jakub Kovář from České Budějovice; the roster includes eight players from the KHL, seven from the NHL, and six from the Czech league.

The IIHF World Championships in Finland and Sweden kick off on May 4; in its first appearance, the Czech team will play Denmark. 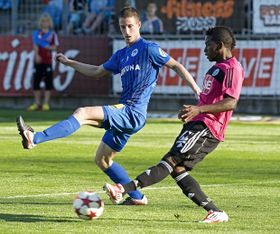 České Budějovice - Liberec, photo: CTK In soccer, Liberec beat České Budějovice 4:0 on Saturday, conserving their advantage of four points over the league’s second-best team Sparta Prague three rounds ahead of the end of the season. Midfielder Miloš Bosančič scored two of the four goals. České Budějovice already avoided relegation in the previous round, while Liberec still had a lot to lose, says coach Jaroslav Šilhavý.

“Budějovice were in a safe place, so I think that the motivation was on our side, and I think that you could see it, after the first and then the second goal, we dominated the game and then we scored another two. Of course we are very happy to have maintained our lead.”

Sparta Prague beat Olomouc 1:0 on Friday keeping their hopes for the title alive. The third contester for the crown, last year’s champions Viktoria Plzeň, face Slavia Prague later on Monday. If Plzeň win, they will remain third with five points behind leaders Liberec.