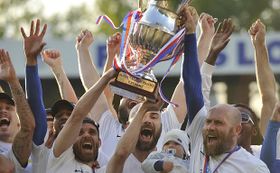 Slovan Liberec, photo: CTK Football club Liberec won the Czech league title on Saturday after drawing 0:0 against Viktoria Plzeň in the final round of the top division. The visiting team and defending champions Plzeň needed a win to clinch the title but failed to convert several chances, hitting the post, for example, in the dying minutes. Both clubs were in contention for the title, but the result means Plzeň finished third in the standings, behind Sparta, who led for much of the season, and of course behind the league champions Liberec. Sparta Prague beat České Budějovice 3:0 in the final round at the weekend to secure second-place.

Two Prague clubs, Bohemians 1905 and Viktoria Žižkov, could not escape relegation and will begin next season in the second division.

Further abroad in the English Premier League, London club Arsenal beat West Brom 3-2 at the weekend to finish third overall in the standings. The result means the club, which is home to Czech star midfielder (and captain of the Czech national team) Tomáš Rosický, has secured a berth in next year’s Champions League. Another London club with famous Czech goalie Petr Čech, Chelsea, finished sixth in the league but could secure the Spurs spot in the Champions League next year if Čech and co. win this years upcoming final against Bayern Munich, to take place in Munich on Saturday, May 19th. Petr Čech will have a second chance to try and secure the prestigious club title with Chelsea; in 2008 he came close but his team lost to Manchester United on penalty kicks. 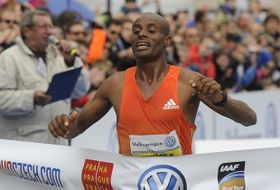 Deressa Chimsa, photo: CTK Ethiopia’s Deressa Chimsa and Agnes Kiprop from Kenya won the International Prague Marathon on Sunday. The Ethiopian runner covered the distance in 2 hours, 6 minutes and 25 seconds, finishing less than a minute behind the official track record. Agnes Kiprop finished the race in 2:25:40. The best Czech runner Jan Kreisinger finished 13th, four seconds within the Olympic limit. Of note, retired footballer and former Juventus Turin star Pavel Nedvěd took part in his first ever marathon; he ran the 42+ kilometre race in 3:50:02, reportedly with enough energy to sprint at the finish. Overall, some 9,000 runners took part in this year’s event. 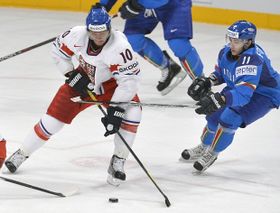 Czech Republic - Italy, photo: CTK The national hockey team finally showed more spark offensively at the World Championship in ice hockey hosted by Sweden and Finland, but unfortunately only against lowly Italy, who they outscored 6:0. In their next match, the Czechs played well but were unable to get on the scoreboard against Russia, who won 2:0. The Czechs remain third in the Stockholm group and face Germany on Tuesday. 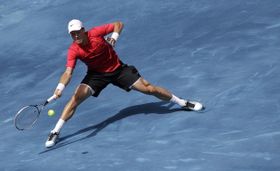 Tomáš Berdych, photo: CTK Men’s tennis player Tomáš Berdych clinched the first set at the Madrid Open final but was unable to secure a second set against Roger Federer who posted an impressive comeback. Berdych, the World No. 7 took the first set 3-6, but lost the last two 7-5, 7-5 against the Swiss. Federer now replaces Rafa Nadal as World No. 2. It's the 11th time Federer has beaten Berdych. The win earned Federer not only the title but a framed ‘Men in Black’ suit from actor Will Smith.