Photo: CTK The Czech national team had an unfortunate start to the Euro 2012 final tournament on Friday when they lost 4:1 to Russia in their first game of Group E in Wroclaw. The Czechs got their opponents under pressure in the opening stages of the game but the Russians withstood the futile Czech efforts and first struck in the 15th minute and again nine minutes later.

The Czechs had severe problems in midfield and in defence which failed to stop the Russian deadly counter attacks. After the break, Václav Pilař scored to give the Czechs hope but the Russian superiority went unchallenged and they added two more hits before the game was over. Czech coach Michal Bílek said the team’s play was too chaotic.

“We were looking to equalize after we scored but instead of patience, we played a lot of risky passes and lost the ball too often which cost us too much energy as the time advanced. Out play was a bit hectic and disorganized which was exactly what our opponents needed.” 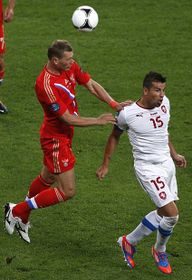 Milan Baroš (right), photo: CTK Some Czech commentators and fans questioned the coach’s choice of Milan Baroš as the sole striker as well as the composition of the defence line where Michal Kadlec obviously could not cope. But Michal Bílek refused to comment on individual players, and said he hoped the team could still advance from the group.

“We are all disappointed with the result because 4:1 was a crushing defeat and conceding four goals was very frustrating. But now is the time to show the team’s strength and character, and I still believe the team is good enough to make up for the defeat in the two next games. So we will analyze our mistakes and prepare for the next game.”

The Czech team is next taking on Greece on Tuesday before facing the hosts Poland in their last stage group game on Saturday. 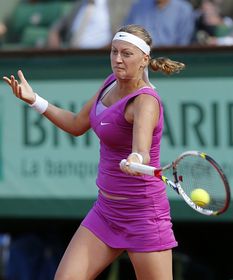 Petra Kvitová, photo: CTK Czech tennis player Petra Kvitová failed to reach the finals of the French Open at Rolland Garros when she lost to Maria Sharapova of Russia 3:6, 3:6 on Thursday. 22-year-old Kvitová beat Yaroslava Shvedova of Kazakhstan, Varvara Lepchenko from the US and Russia’s Nina Bratchikova on her way to the semis but Sharapova proved too much for the Czech.

“She played very well; she improved a lot on clay. I did not play badly but she was better around the court. She deserved it, and she has now become world’s number one. She did a good job.”

Petra Kvitová said she would take a few days off before getting ready for Wimbledon where she last year won her only Grand Slam title. Eliška Klučinová, photo: CTK Moving on to field and track now where 24-year-old athlete Eliška Klučinová set a new national record in heptathlon. Klučinová won an international event in Kladno on Sunday with a score of 6283 points, breaking the previous record by 15 points and qualifying for the Summer Olympics in London. The 37-year-old Czech veteran Roman Šebrle finished second in decathlon at the event with 8097 points, falling short of the Olympic qualification limit of 8200 points. The 2004 Olympic champion will yet try to qualify for the games at the upcoming European Championships in Helsinki later this month. 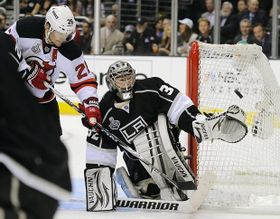 Patrik Eliáš (left), photo: CTK And in hockey, three Czech players with the New Jersey Devils in the NHL are still keeping their hopes alive of winning this year’s Stanley Cup. The Devils with Patrik Eliáš, Marek Židlický and Petr Sýkora were down 3:0 against the Los Angeles Kings in the best-of-seven final series. But they won two games in a row when on Sunday, they beat the Kings 2:1. The next final game is to be played on Monday.