In Sports News: Fans, players mark the 50th anniversary of Czechoslovakia’s second-place finish at the 1962 World Cup; Pirlo emulates Panenka with a cheeky chip against England at EURO 2012; Czech football champions Liberec will face Kazakhstan’s Shakhter Karagandy in the 2nd qualifying round of the Champions League; Kvitová begins defence of Wimbledon title. Brazil - Czech Republic, photo: archive of the Czech Television The Czech Republic’s football squad may be out of Euro 2012 but that doesn’t mean there hasn’t been plenty of football news: recently fans as well as former squad members marked the 50th anniversary of Czechoslovakia’s second-place finish at the 1962 World Cup. The final, held in Santiago de Chile pitted Czechoslovakia against Brazil and Josef Masopust, now in his 80s, famously scored the opening goal.

Brazil, however, responded and the match ended 3:1. 50 years on, five players from the original Czechoslovak squad – including Masopust – travelled to Brazil to mark the anniversary and attended a ceremony at the Czech consulate in Sao Paulo.

One of the original players, forward Josef Jelínek, recalled details of the Czechoslovak’s squad’s campaign 50 years on:

“When we departed for Chile, we had only one team manager, one doctor, and 18 players. But we had no masseur so we had to hire one in Chile and when we reached the final, he was overjoyed, walking around singing all the time! He was absolutely thrilled to be the sole Chilean to ‘make it’ to the final!” Václav Mašek, Josef Masopust, Josef Jelínek, Jozef Štibrányi, Jiří Tichý, photo: CTK Luis Felipe Scolari, former Portugal manager and now manager of Palmeiras, meanwhile, expressed the hope that the current Czech team will qualify for the 2014 World Cup which will take place in Brazil: the Czechs, who lost in the quarterfinals at the European Championship that is still underway, will begin qualifying for the World Cup in September. Their first match, against Denmark, will take place on September 8. Andrea Pirlo, photo: YouTube Back at Euro 2012, even though the Czechs are out, there were shades of Antonín Panenka on Sunday evening in Italy’s highly-entertaining match against England, which came down to penalties: the tireless and supremely talented Andrea Pirlo coolly caught England goalkeeper Joe Hart off guard on Italy’s third penalty when he chipped the ball into the centre of the goal as Hart dove right. The cheeky penalty was highly reminiscent, commentators noted, of Antonín Panenka’s famous penalty that secured Czechoslovakia’s win over West Germany at the European Championships in 1976.

Certainly, takes a very cool customer to kick it like Panenka: Francesco Totti was one who used it successfully against the Netherlands 12 years ago at EURO 2000, but also had an infamous fail in Serie A when he kicked the ball straight into the goalkeeper’s arms – all on view at youtube.

Czech league champions Liberec will face Kazakhstan’s Shakhter Karagandy in the 2nd qualifying round of football’s Champions League; the draw was decided on Monday in Nyon, Switzerland, shortly after 12 pm. The first leg of the match-up will take place on either July 18 or 19, with the second-leg taking place a week after that. Liberec goalkeeper David Bičík commented that that the team was of the “Russian school” in terms of style and estimated that the team could expect hot conditions in Kazakhstan. On the downside for fans, they will not be able to see Theo Gebre Selassie, one of the Czech defenders who performed admirably at Euro 2012, following his signing of a four-year contract with Germany’s Werder Bremen. 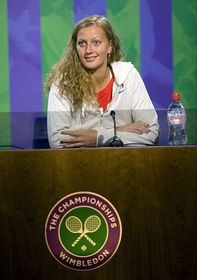 Petra Kvitová, photo: CTK The most famous grand slam tennis competition, Wimbledon, has begun, and many Czechs will of course be looking to watch world No. 7 Tomáš Berdcyh, recently described by at least one commentator as a “dark horse” for the title. Perhaps even more will be rooting for women’s player and World No. 4 Petra Kvitová to defend: she won the championship, her first grand slam title, last year against Maria Sharapova. Her opening match this year is against Akgul Amanmuradova of Uzbekistan, while Berdych will face Ernests Gulbis of Latvia.