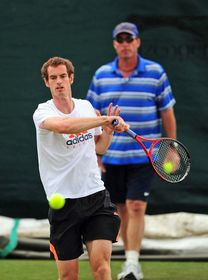 Andy Murray, Ivan Lendl, photo: CTK “I recall how talented he was…how many shots he could hit. That was quite amazing to me, how clean he was hitting the ball.”

“What did you think he needed to do to take it to the next level? What does he still need to do?”

“I don’t like talking about that too much, Anna…that’s something we are working on.”

“Ok, what did you think you could teach him?”

“Hopefully how to win seven matches and a major.”

That was tennis legend Ivan Lendl there, talking cryptically to US sports network ESPN on his decision to coach Britain’s Andy Murray. But alas, British hopes of the first Wimbledon men’s singles title since 1936 were dashed on Sunday as Murray was defeated by the Swiss former champion Roger Federer 4-6, 7-5, 6-3, 6-4. Murray, the first British men’s Wimbledon finalist in 73 years, turned to retired Czech-born player Ivan Lendl back in December last year to serve as full-time coach to the 25 year-old Scot. Lendl is famous for never having won Wimbledon, despite winning eight other Grand Slam finals and playing in nineteen. Media reports have highlighted some parallels between Murray and Lendl, specifically that Lendl lost his first four Grand Slam singles finals, exactly the same number as Murray, following his match on Sunday. This is the first time the 52 year-old Lendl, who was born in Czechoslovakia and became a US citizen in 1992, has served as a coach. “He may play the next five and not win or he may win the next five. Who knows? We don’t really know, but we know that it’s worth trying,” Lendl told the New York Times on Monday, reflecting on Murray’s defeat. 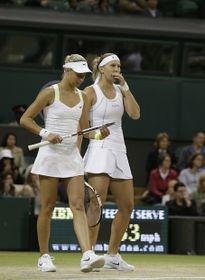 Andrea Hlaváčková, Lucie Hradecká, photo: CTK And staying with tennis, the last remaining Czech players crashed out in the finals of the Wimbledon championships on Saturday. American sisters Venus and Serena Williams defeated Czechs Andrea Hlaváčková and Lucie Hradecká in the women’s doubles finals in straight sets, 7-5, 6-4. The Czech players won the French Open in 2011, but only reached the second round of the Wimbledon tournament during that year. The 27 year-old Prague-born Hradecká and the 25 year-old Plzeň-born Hlaváčková, caused an upset in this year’s quarter finals, knocking out reigning French Open doubles champions Sara Errani and Roberta Vinci in straight sets. However, they proved no match for the Williams sisters in the finals, Serena putting on a particularly energetic performance having won the women’s singles championships earlier in the day.

Meanwhile, nine times Wimbledon women’s singles champion, the retired Czech-American tennis player Martina Navrátilová, lost her Wimbledon Ladies Invitation Doubles Final 6-3, 6-2 over the weekend. Navrátilová was teamed up with fellow Czech and 1998 Wimbledon winner Jana Novotná. The pair went down to Lindsay Davenport and Martina Hingis in the round-robin tournament designed for players who have retired from the professional game. In a BBC radio interview on Sunday following the match, Navrátilová choked back tears as she recalled her defection from Communist Czechoslovakia in 1975 at the age of eighteen. She also remembered how her parents could not gain permission to leave communist-era Czechoslovakia and thus missed seeing her first Wimbledon singles win in 1978. Navrátilová spoke how her parents drove to the German border in the west of the country and ended up watching the final on German TV, adding that: “The regular Czech TV wouldn't show it because I was a persona non grata in those days.” But on a more cheerful note, she added that a year later, Britain’s Duchess of Kent intervened in order to have the authorities permit Navrátilová’s mother attend 1979 tournament, which the tennis legend also won. 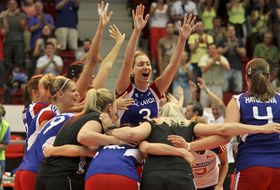 Photo: CTK The Czech Republic won the Women’s Volleyball League title on Friday after a three set win over their Bulgarian rivals. The match, played at home in the city of Karlovy Vary, was watched by around 3,800 spectators in the KV Arena. Bulgaria were up early in the match, but the Czech Republic fought back in the first set, winning 26-24. The second set went more smoothly for the Czechs, with a 25-18 win, while Bulgaria put on a valiant show in the third, fighting hard for every point, but the Czech ultimately prevailed 25-23. Player Anita Havlíčková, who scored 18 points during the game was also named MVP – Most Valuable Player, while her teammates Helena Havelková and Julie Jášová were also singled out for exceptional play. This season, the Czech team has only lost two matches out of fourteen played.