The Czech women’s basketball team suffered defeat at the hands of China at the London Olympics on Saturday. The final score was 66-57, with Czech Republic in Group A of the tournament along with the United States, Turkey, China, Angola and Croatia. The women’s team are set to play Turkey on Monday. 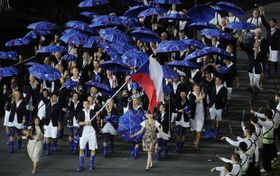 Petr Koukal carried the country’s flag at the opening ceremony on Friday, photo: CTK Czech badminton hopeful and cancer survivor Petr Koukal saw defeat in his first match of the London Olympics, losing to Indonesia’s Taufik Hidayat on Saturday 21-8, 21-8. The match was an entirely one-sided affair for Hidayat, who easily swept aside the Czech in the match, which took place in London’s Wembley Arena. For Koukal, who was diagnosed with testicular cancer two years ago and who carried his country’s flag at the opening ceremony on Friday, merely being at the Games was something of an achievement. A day later, Koukal faced Portugal’s Pablo Abián in a far more competitive match. However, Koukal also saw defeat here, going down 21-17, 16-21, 21-16. 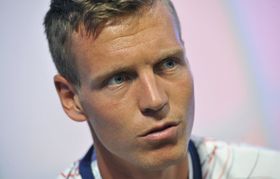 Tomáš Berdych, photo: CTK The Czech tennis player Tomáš Berdych crashed out of the Olympics on Saturday with a first round defeat to Belgium’s Steve Darcis. The best of three match, which was played at Wimbledon’s famous All England Club, ended 6-4, 6-4, and rounds off a tough summer for the Czech. The sixth seed lost his opening match at Wimbledon to Latvia’s Ernests Gulbis with exactly the same score – 6-4, 6-4 a few weeks ago – a far cry from reaching the finals of that competition two years ago. After the match, Berdych reflected that grass court surfaces seem to be a particular weak point for his this year and noted that he will have to reflect on how to improve his game in the coming year. 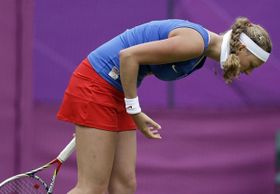 Petra Kvitová, phooto: CTK And staying with tennis, Czech women’s hopeful and world number six Petra Kvitová had an early scare with her opening Olympics match against the number seventy-six ranked Ukrainian, Kateryna Bondarenko. In the demanding match, Kvitová won the first set 6-4 but lost the second 5-7. The Czech tennis player was able to recover in the third, closing out 6-4. In the next round, Kvitová is set to face China’s Shuai Peng. Here she is talking to Czech Television after the match:

“Sure, it was a tough match, but the important thing is that I won and that it what matters. There are definitely many places where I know I can improve and it was rather similar to the first round of Wimbledon I played not long ago, where I also battled through under less than perfect conditions. But that ended up well and so did this in the end, so I am happy that I am progressing further.”

Meanwhile, the Czech women’s doubles partners Petra Cetkovská and Lucie Šafárová crashed out in the first round 2-6, 3-6 to Italy’s Sara Errani and Roberta Vinci. 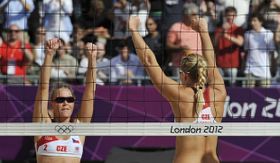 Lenka Háječková and Hana Klapalová, photo: CTK The Czech women’s beach volleyball duo Lenka Háječková and Hana Klapalová saw their first win at the tournament on Monday, defeating the Mauritius duo Natacha Rigobert and Li Yuk Lo two sets to zero. The sweeping victory, in the space of a mere 23 minutes, came as a relief to the Czechs, who suffered a 2-0 defeat on Saturday at the hands of Germany’s Katrin Holtwick and Ilka Semmler. The win puts the Czechs at the top of their Group A table – at least for now – which consists of teams from Germany, Mauritius, the Czech Republic and Brazil. 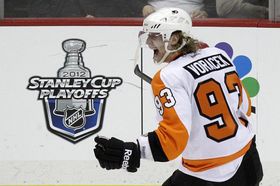 Jakub Voráček, photo: CTK And finally, in non-Olympic-related news, the NHL team Philadelphia Flyers have signed the Czech Republic’s Jakub Voráček in a four-year deal worth million. The ice-hockey forward was part of the Czech Republic’s world championship winning team in 2010 and joined the Flyers last year with a one-year contract worth .25 million. The new deal represents an unmistakable affirmation of the Flyers satisfaction with their player, who scored 18 goals for the team during the last season. One other Czech, 35-year-old defenceman Pavel Kubina, also plays for the US team.