In Sports news this Monday: Two Czech clubs begin their Europa League campaign while football at home is set for fresh scandal; in hockey, Jaromír Jágr and other NHL legends join the Czech extraliga; and a Czech billionaire aims to revive the communist-era cycling event known as the Peace Race. 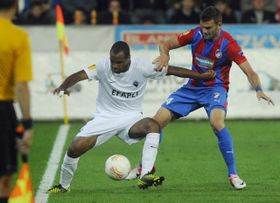 Viktoria Plzeň - Academica Coimbra, photo: CTK Two Czech football clubs – Viktoria Plzeň and Sparta Prague – began their campaign in UEFA’s Europa League last week. Plzeň, which finished third in the top Czech division last season, faced Portugal’s Academica Coimbra in Group B in Plzeň on Thursday. Coimbra, which earned a spot in the European competition by winning the Portuguese FA cup, went ahead 1:0 in the first half but Plzeň soon levelled and won the game 3:1. Plzeň captain Pavel Horváth, who scored only his 4th career header in the game, said he thought the match would be more difficult.

“I was expecting that they would be much more dangerous. They were, but we played well save two or three moments in the first half when we underestimated defence and a few rebounds. But they hardly created any opportunities and we should have scored at least twice in the first half and the whole match would have been different.”

For their part, last year’s Czech runners-up Sparta Prague played Olympique Lyonnais in Group I in France on Thursday, and lost 2:1. Lyon were a better team although it took them nearly an hour to score, adding another strike just three minutes later. Sparta got a consolation goal with a beautiful shot by midfielder Ladislav Krejčí.

Plzeň will next play Athletico Madrid in Spain in October while Sparta will host Athletic Bilbao. 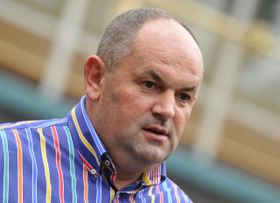 Miroslav Pelta, photo: CTK Back home, Czech football is heading towards a fresh corruption scandal. The news broke after Sparta Prague controversially lost to Plzeň in the 7th round of the Gambrinus liga. Sparta boss Daniel Křetínský then met with the head of the Czech FA, Miroslav Pelta, and told him he had hired the Pinkerton detective agency to investigate corruption in the top football division. Mr Pelta, visibly shaken, almost immediately contacted the anti-corruption police who took over the case. No details were disclosed as to what kind of corruption was allegedly taking place but rumours have it that it had to do with match fixing and betting.

Meanwhile, action continues in the Gambrinus liga with Plzeň tying 1:1 against Teplice, Jablonec beating Slovácko 0:1, Brno beating Jihlava 5:1, and Liberec drawing 2:2 against Ostrava. Jablonec share the top spot with Plzeň but Sparta could go ahead if they beat Olomouc later on Monday. Jaromír Jágr (right), photo: CTK Moving on to hockey now where after eight years abroad, Jaromír Jágr is enjoying homecoming to the Tipsport extraliga, thanks to the NHL lockout. Jágr of the Dallas Stars joined his own team, Kladno, along with Tomáš Plekanec of the Montreal Canadiens, Tomáš Tlustý of the Carolina Hurricanes, and other players.

Jágr first appeared in Wednesday’s game against Slavia in Prague which Kladno lost 2:3 but on Friday, Kladno took on Vítkovice and won 4:1. The 40-year-old star scored one goal and one assist in the match. On Sunday, Kladno beat Sparta Prague 3:4 and Jágr racked-up another point. But he was expecting more people to come see the team, with all the NHL players on the roster.

“I think our team could not get any stronger than this. Well it could but I don’t think more people than 5,500 would come to see us anyway. There are 70,000 people living in Kladno so it must be out of fashion to come see hockey. Sadly, more people would come to see us in Prague. But the atmosphere was great and I think that those who came enjoyed it.”

Other NHL players who returned home for the duration of the lockout include Roman Červenka of the Calgary Flames who joined Slavia, Aleš Hemský of the Edmonton Oilers who now plays for Pardubice, and Washington Capitals goalie Michal Neuwirth who joined Sparta Prague.

And finally, Czech multi-billionaire Zdeněk Bakala announced plans to revive the famous communist-era cycling event, the Peace Race. Founded in 1948, the race traditionally took place in Czechoslovakia, Poland and East Germany and was once the best-known amateur race in the communist block.

Mr Bakala, formerly a close collaborator of the late president Václav Havel, owns coal mines in northern Moravia, the publishing house Economia, and other assets. He spoke to Czech Radio about his plans.

“It’s a race that many people miss. It was an important race too; when you talk to Eddie Merckx or Hein Verbruggen from the UCI, they all say they miss it. I think it could be successful and it would be worth reviving in a modern form.”

Zdeněk Bakala, who in 2012 bought majority stake in the Belgian professional cycling team Quick Step, revealed no further details of his latest plan. For their part, the Czech Cycling Federation has been very cautious about the news, arguing they would say more when it becomes obvious whether the plan is realistic.