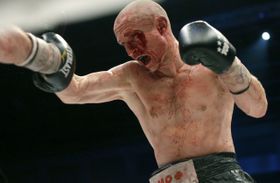 Lukáš Konečný, photo: CTK In boxing, WBO jr middleweight champion Zaurbek Baysangurov (28-1, 20 knockouts) retained his title in a hard fought match against interim titleholder Lukáš Konečný (48-4, 23 knockouts) on Saturday. The fight in Kiev, Ukraine went all 12 rounds with judges giving a unanimous decision to Baysangurov on points: the scores were 119-109, 118-110 and 117-111. Konečný suffered a bad cut over his left eye at the start of the last round. Back in Prague, the boxer told reporters he had been hampered by his eyes watering unusually after the first blows landed in the match’s first three minutes. The boxer expressed bewilderment over the development and made clear a medical examination would be in order. In his view, he wasn’t able to give his all in the fight as a result of the ‘handicap’. 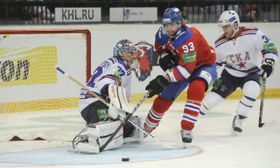 Jakub Voráček (center), photo: CTK Czech forward Jakub Voráček – who plays for the Philadelphia Flyers in the NHL – suffered an injury with interim team Lev Praha in the KHL at the weekend. The forward, playing in Europe due to the NHL lockout, became the fourth NHL player overseas to be hurt. Voráček injured his knee in the third period in a game against SKA St. Petersburg. Ahead of the lockout, the Czech player signed a four-year contract with the Flyers. Last season he racked up 18 goals and in seven games with Lev so far this season he has earned one goal and seven assists. Voráček will be out of action for roughly four weeks. 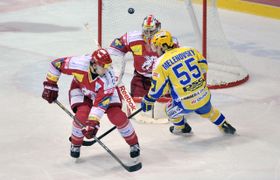 Třinec - Zlín, photo: CTK In the Czech hockey league, Zlín won its last two matches to slip into second spot: first, the club snapped Kladno’s six game winning streak on Friday. Then, Zlín topped Třinec 3:2. Other teams that have picked up their game include Pardubice, who also won two matches and scored six goals against Liberec and Plzeň who defeated České Budějovice 4:1. Kometa Brno continue to top the standings, and beat Vítkovice 2:1. Tomáš Řepka, David Lafata, photo: CTK In football, famously short-tempered defender Tomáš Řepka saw red at the weekend after contesting a penalty call by referee Pavel Franěk. Franěk first pulled a yellow card, then a red over Řepka’s antics. The penalty call of shirt tugging came in the 87th minute against České Budějovice who were facing Jablonec: David Lafata was the target of the pulling and converted the goal. Jablonec won 2:1 and now stand atop the standings – two points ahead of Olomouc. In other matches at the weekend, Olomouc beat Mladá Boleslav 1:0, and Příbram, who had been in last place, shocked third-place Plzeň in their match-up, winning 1:0. 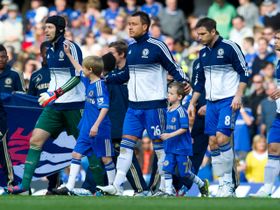 Petr Čech (left), photo: CTK Abroad, in the English Premiership, Chelsea, with goalie Petr Čech, extended their lead at the top of the standings to four points over nearest rivals Manchester United. The club defeated Norwich at the weekend 4:1 but the match didn’t start well for Čech, who was unable to stop Holt in the 11th minute. Chelsea, however, were able turn the match around, getting goals from Torres, Lampard, Hazard and – in the second half – Ivanovic. So far this season, Chelsea have won six of seven games and drawn once. The club has only conceded four goals so far.