In Sports News this Monday: Plzeň top ice hockey’s Extraliga going into the second half of the regular season; defender Marek Židlický waves goodbye after a successful return to his first club Kladno; the Czechs hammer Japan at the World Floorball Championships; and Viktoria Plzeň play Atletico Madrid to decide on top spot in their Europa League group. 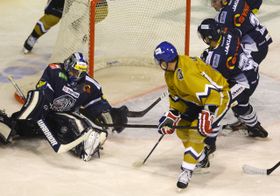 Kladno - Liberec, photo: CTK Thanks in part to the quality of players available during the NHL lockout, it has been an unusually exciting season so far in the Czech Extraliga. Plzeň were on top as the second half of the regular season got underway on Sunday evening and cemented their dominance with a 3:2 victory over Litvínov. That result kept the leaders six points clear of second-placed Kladno, who also won, overcoming Liberec 2:1. Sunday’s game was the final appearance in a Kladno strip for home-grown star Marek Židlický, who is returning to the United States. The New Jersey Devils player was a big hit with the fans – and the most productive defender in the league. Židlický spoke to reporters after receiving a rousing send-off from the Kladno faithful.

“I wasn’t here to pick up points, but to prepare chances for the other guys so that we could win games. I’ve really enjoyed it from the start of the season. The fans have been great. That’s why we’re here, or at least that’s why I was here. And Kladno are at the top end of the table, which is great.” 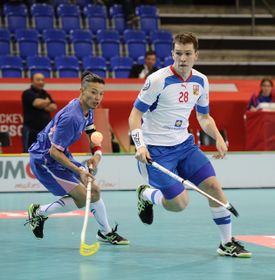 Czech Republic - Japan, photo: CTK The Czech Republic had a total walk in the park in their opening game at the World Floorball Championships, which are taking place in the Swiss cities of Zurich and Berne; they thrashed Japan 21:1 on Sunday, with Tomáš Sladký and Martin Tokoš grabbing four goals apiece. On Monday night the Czechs face the United States, who, like the Japanese do not rank among the tournament favourites. Nevertheless, coach Tomáš Trnavský says his charges won’t be underestimating the Americans.

“I think it’ll be a completely different game, because we’ll be facing players who are at another level entirely. If we go into the match lightly it certainly won’t be simple. We’ll do everything to ensure that our players are 100-percent focused.” 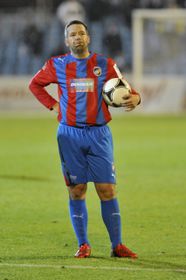 Pavel Horváth of Viktoria Plzeň, photo: CTK The Czech soccer league is on its winter break, but Viktoria Plzeň and Sparta Prague both have one more duty before Christmas, their final Europa League group games on Thursday night. Happily both are already through to the knockout stage, though Plzeň at least still have something to play for: if they manage to overcome Atletico Madrid in West Bohemia, they will top their group.

Two big names in the world of Czech horseracing are parting company, the news website iDnes reported on Monday. Jockey Josef Bartoš says he is moving on after failing to reach agreement on extending his contract to ride for the stable of the legendary jockey and trainer Josef Váňa. Bartoš won the Velká pardubická steeplechase on Váňa’s Decent Fellow in 2006 and Sixteen in 2008.