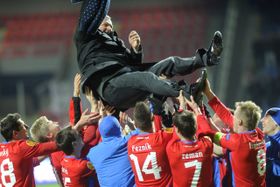 Viktoria Plzeň, photo: CTK We begin with football and the news that Viktoria Plzeň beat last year’s Europa League champions Atletico Madrid 1:0 at home on Thursday to win the competition’s Group B. The only goal came from defender Václav Procházka who scored from close range after a corner kick in the 26th minute. Both clubs had already qualified for the knock-out stage before the final round, which is why Atletico did not bring their star striker Falcao to west Bohemia. For Plzeň manager Pavel Vrba, however, it was still a valuable victory.

“I think they are one of the best teams in Europe. I’m of course aware they did not arrive in full strength. But we beat one of the top clubs and it doesn’t really matter what their line-up was.”

The other Czech club in the Europa League this season, Sparta Prague drew 0:0 against Athletic Bilbao in Spain on Thursday, having also already advanced to the knockout phase, from second place in Group I. 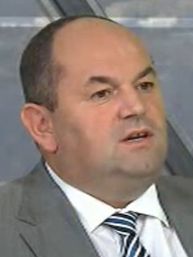 Miroslav Pelta, photo: Czech Television The head of the Czech football association, Miroslav Pelta has approached the governing body of European football, UEFA, over an alleged corruption scandal in the domestic league. Vitkoria Plzeň face accusations of bribing the referees that officiated in a game they played against Jablonec last season, which Plzeň won 2:0. The case is under investigation by the football association and the police; on Sunday, Mr Pelta said he had asked UEFA for assistance over the behaviour of Plzeň owner Tomáš Paclík.

“I would expect that in a scandal of this size, all those involved would cooperate. However, the owner of Vitkoria Plzeň sends out messages and threats through the media and files lawsuits, and put the association under immense pressure.”

According to the Czech FA chairman, UEFA promised to provide consultations and possible send a disciplinary inspector to Prague to help untangle the case. 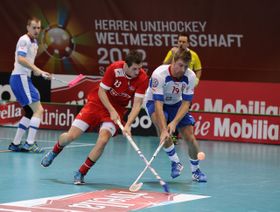 Norway - Czech Republic, photo: CTK Moving on now to the sport of floorball where the Czech Republic’s men’s team saw big disappointment at the world championships in Switzerland, which ended on Sunday. The Czechs were hoping to at least equal their third place finish from two years before. But the event did not go at all well for them; after failing to win their group, their medal hopes vanished after losing to Finland in the quarterfinals.

The Czechs then played Norway for fifth place but lost in a penalty shootout. Seventh place is historically the worst result for the Czech Republic in the competition. In an interview for the tournament’s website, experienced striker Tomáš Sladký spoke about his disappointment.

“This tournament was the worst experience in my career. What can say? We lost the tournament in the group game against Latvia. That was the decisive moment and in this game, we lost everything, and then, every game was worse and worse. We can now just sit in the dressing room and cry like babies.” 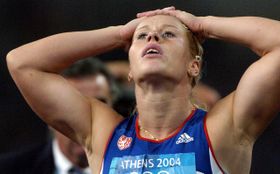 Věra Pospíšilová-Cechlová, photo: CTK And finally, discus thrower Věra Pospíšilová-Cechlová is set to receive the bronze medal from the 2004 Olympics in Athens. The International Olympic Committee last week disqualified four athletes who took medals in Athens over doping, including the bronze medallist in the discus, Irina Yatchenko of Belarus. The IOC will now approach the Belarusian Olympic Committee with a request to return the medal; Pospíšilová-Cechlová, who finished fourth at the Olympics, told Czech Radio getting a medal – even eight years later –would be a great satisfaction for her.

“My biggest motivation has always been to win an Olympic medal. It’s still only speculation but if it actually happens, it would be like a dream come true for me.”