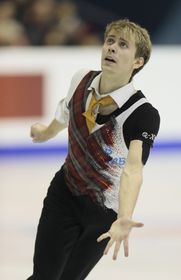 Michal Březina, photo: CTK Czech figure skater Michal Březina, who finished fourth four times in major competitions in the past, broke the curse at the weekend earning bronze at the European Figure Skating Championships in Zagreb, Croatia. Březina, skated to a version of Grieg’s The Hall of the Mountain King in the short programme and Ennio Morricone’s soundtrack from the 1987 film The Untouchables in the free skate. Although he fell once, the Czech skater was able to edge France’s Michal Joubert, the defending World Champion, for the final medal. After the competition here’s what Michal Březina had to say:

“[If we look back at my career so far] it was six years of hard work since I began and I am glad that I was able to clinch a medal... I am extremely happy that I didn’t finish outside the medals again and now have one I can hang up at home next to my junior ones. I am very happy I was able to pull it off; even if there was a mistake in the begin ing, things turned out well.”

Staying on the ice, sprint speed skater Karolína Erbanová improved her own Czech record at the World Sprint Speedskating Championships in Salt Lake City at the weekend, with a time in the 500 metres of 37,67; and finishing ninth. A day earlier she set a new Czech record in the first one kilometre event with a time of 1,13. The racer was disqualified a day later in the 1,000 metres and finished 24th overall in the standings. 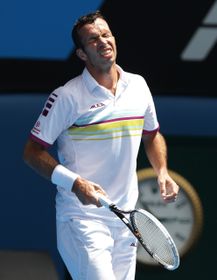 Radek Štepánek, photo: CTK In tennis, one of the key members of the Czech Davis Cup team, Radek Štepánek, will not take part in the opening round of the competition in Switzerland. The player, who helped clinch the Davis Cup title for the Czechs last year, faces an operation for a herniated disc. He has been replaced on the roster by player Ivo Minář. Last November the Czech squad downed Spain in the 100th edition of the Davis Cup: the final went down the wire to a fifth and final match, which the 34-year-old Štepánek won against Nicolas Almagro.

The Czech Republic will field the same women’s team in this year’s Fed Cup to defend last year’s title. Players Petra Kvitová, Andrea Hlaváčková, Lucie Šafařová and Lucie Hradecká have all been nominated. Their defence of the title will begin on February 9 and 10. The Czech women’s team will face Australia’s in the opening round. 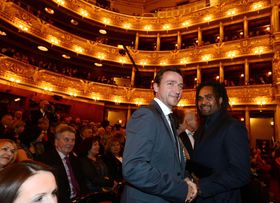 Vladimír Šmicer, Christian Karembeu, photo: CTK In football, Prague club Slavia on Sunday celebrated the 120th anniversary of its founding at the National Theatre. A two-hour presentation recalled the club’s rich history remembering past players like Frantíšek Plánička, Josef Bican and Frantíšek Veselý. Present on the evening were past trainers, members of other Prague clubs, the football association as well as past international players such as Christian Karembeu and the Czech Republic’s own Vladimír Šmicer. The evening’s MC was well-known radio and TV presenter Leoš Mareš, aided by Slavia fan and actor Vladimír Čech. The head of the Czech FA, Miroslav Pelta, and Prague Mayor Bohuslav Svoboda also attended to wish the club all the best.