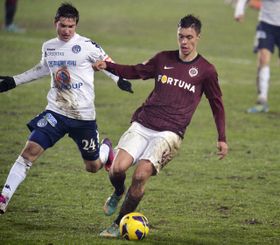 Sparta Praha - Slovácko, photo: CTK The top domestic football league, the Gambrinus liga, resumed at the weekend after the winter break. In the first round of the spring season, Teplice drew 1:1 with Dukla Praha, while Jihlava earned a scoreless draw against Hradec Králové. In other matches Baník Ostrava drew 0:0 against České Budějovice on Saturday (Milan Baroš’s first appearance for Ostrava after 11 seasons abroad).

Sparta routed Slovácko 4:0 to climb into second spot in the standings just behind Viktoria Plzeň. All of the club’s goals came in the second half. Fellow Prague club Slavia, meanwhile, failed to rebound after the winter break, opening with a 2:1 loss against Olomouc while 3rd place Jablonec lost 1:0 against Liberec. 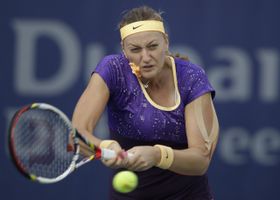 Petra Kvitová, photo: CTK The top Czech women’s tennis player Petra Kvitová won her first WTA tournament since last August at the weekend. Kvitová defeated Italy’s Sara Errani in the final in three sets by a score of 6:2, 1:6, 6;1 to take the title in Dubai. The win saw Kvitová move up in the overall women’s rankings to 7th spot.

… while Berdych loses to Tsonga in Marseille final 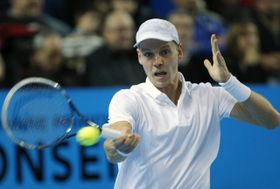 Tomáš Berdych, photo: CTK In men’s tennis, Czech player Tomáš Berdych had match point against Jo-Wilfried Tsonga in the final of the Open 13 event in Marseille but failed to convert. The French player, who rallied from a set down and won the key tie-break in the second, won the final set by two games: the final score was 3-6, 7-6 (8-6), 6-4. The match represented Berdych’s 17th career ATP final, with his record falling to 8-9. The Czech had won the three previous matches against Tsonga. He remains 6th in the men’s standings.

NHL: Pavelec and Jets down Devils Ondřej Pavelec, photo: CTK Turning to hockey, in the NHL overseas Winnipeg goalie Ondřej Pavelec stopped 24 shots on Sunday by New Jersey to help his club win by a score of 4:2. In their last four games the Jets have won three times with Pavelec in goal and are edging closer to a playoff spot in the shortened NHL season. The Jets are currently in 11th spot in the Eastern Division.

In other action, Czech star forward Jaromír Jágr scored once and earned one assist as his club, the Dallas Stars, won 3:1 over San Jose.

Lev Praha game away from sweep 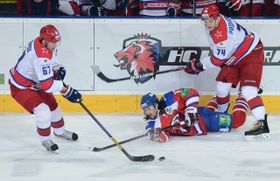 Lev Praha - CSKA Moscow, photo: CTK Back home, Czech club Lev Praha, which plays in the Kontinetal Hockey League is a game away from elimination in the league playoffs: after losing twice to CSKA Moscow in Moscow, Lev Praha were defeated at home. The Prague club was leading 1:0 in the second period when CSKA turned the game around in the space of just 39 seconds, scoring twice. The Russian club added a third goal in the third period to clinch the win. The series resumes on Monday in Prague with Lev Praha trying to avoid a sweep. 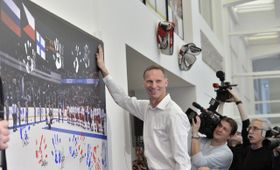 Dominik Hašek, photo: CTK Former members of the Czech national hockey team which won the Nagano Winter Olympics in 1998 met in Prague on Saturday, 15 years after their triumph. All but five players took part in the reunion. Exceptions were Jaromír Jágr, Milan Hejduk and Roman Hamrlík, who play in the NHL, and Jiří Dopita, who plays in a lower Czech division. Petr Svoboda, who scored the winning goal in the Olympic final against Russia, was also absent for work reasons. The team will launch an exhibition of photos and memorabilia from the Olympic tournament at Prague’s Veletržní palác.