In Sports News this Monday: the Czech Republic pick up five medals at the European Indoor Athletics Championships – including gold for Pavel Maslák in the 400m; a win in the Malaysian Open gives Karolína Plíšková her first WTA title; and Viktoria Plzeň see their lead in the Czech league shrink to one point as they prepare to face Fenerbache. 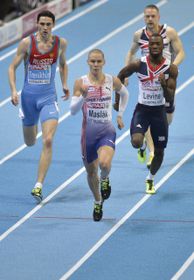 Pavel Maslák, photo: CTK The Czech Republic picked up five medals at the European Indoor Athletics Championships in Sweden’s Gothenburg, with the most valuable of them gold for Pavel Maslák in the men’s 400m. The 20-year-old spent virtually the entire race in front and was the clear winner, finishing in a time of 45.66 seconds. That is the fastest time seen in Europe this season – and sets a new Czech national record. Maslák said becoming the fastest Czech over the distance had been on his mind going into Sunday’s final.

“I had thought that victory would come with the Czech record – and that’s how it was. I’d expected a tough battle with the Russian Trenikhin in the final straight, but he chose a looser approach and that made it easier for me. I believed that if he were ahead of me in the run-in, I’d get him at the finish, and if I was ahead of him, I wouldn’t let him pass.”

Maslák was also on the team that took bronze in the men’s 4 x 400m relay; that result was declared only after the UK, who had come first, were disqualified following a Czech protest.

The Czech women also came third in the relay. Zuzana Hejnová – who had come fourth in the individual 400m – was the last of the four Czech runners.

“I’m very happy. To be honest, I hadn’t much believed we’d get a medal, but when I saw the girls start and how they were running I said to myself, maybe we could manage it. As for whether it makes up for the individual race, I’m not really that disappointed.”

The other Czech medal winners in Gothenburg were Ladislav Prášil, who took bronze in the shot-put, and Jaroslav Bába, who came third in the high jump. 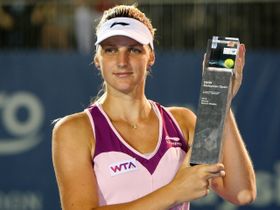 Karolína Plíšková, photo: CTK There is a new name to watch out for in Czech tennis. Though ranked only 127th in the world, Karolína Plíšková has just won her first WTA title, the Malaysian Open. Plíšková, 20, started poorly but fought back to beat Bethanie Mattek-Sands of the United States 1-6 7-5 6-3 in Sunday’s final in Kuala Lumpur. 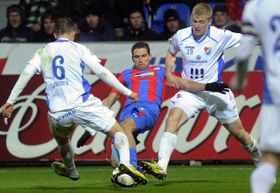 Viktoria Plzeň - Baník Ostrava, photo: CTK After the weekend’s action Viktoria Plzeň are still in front in the Czech first division, though they have seen their lead reduced to a single point, following a 1:1 home draw against Baník Ostrava on Sunday. Plzeň full-back David Limberský failed to convert a penalty in that game, while Ostrava returnee Milan Baroš saw a header hit the woodwork. The leaders have Sparta Prague breathing down their necks, following their 2:0 away win over České Budějovice. On Thursday Plzeň will welcome Turkey’s Fenerbache to West Bohemia for the first leg of their Europa League round of 16 tie.