In Sports News this Monday: the national football squad suffers a debacle against Denmark in World Cup qualifying; striker Matěj Vydra is named Championship Player of the Year; speed skater Sáblíková clinches her 10th career gold at the Worlds; hockey club Slavia win the opener of their semi-final series against Plzeň. 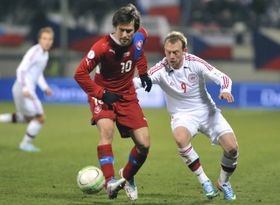 Czech Republic - Denmark, photo: CTK The Czech national football team was heavily outclassed by Denmark's squad in Olomouc last Friday in their World Cup qualifier, losing by a score of 3:0. The Czech team saw two opportunities in the first half but fell apart in the second on defence, allowing the Danes too much room at the back and creating virtually no scoring chances of their own. Andreas Cornelius opened the scoring in the 56th minute and the Danes scored two more before time. The Danish squad even came close to adding a fourth but Petr Čech was able to deny Jacobsen who was in alone.

The debacle leaves the Czechs in 4th place in their group and with a very tough climb ahead to qualify for the World Cup in Brazil next year. As defender Michal Kadlec said every match here on in is “a final”. Striker Matěj Vydra agrees the remaining matches will be difficult but believes the Czechs still have a chance, even against group leaders Italy:

“The Italians will definitely be tough but maybe we’ll get some chances. They may push ahead and maybe we’ll be able to surprise them the way the Danes surprised us. We’ll try to wait for breakaways and maybe we can pull something like off.” Michal Bílek, photo: CTK The Czechs’ poor showing also leaves the future of team coach Michal Bílek very much in doubt. On Friday, towards the end of the game in Olomouc he faced chants of “Bílek ven!” or “Bílek out!”. At the very least, the Czechs will have to win against Armenia on Tuesday, for him to stay on. Here’s what he had to say:

“That’s how I am approaching it: if we don’t win, it will probably be over for me. In a few days we face Armenia and we have to win if we want to think about making it to Brazil next year.” Matěj Vydra (right), photo: CTK In other football news, while the Czech squad may be in the doldrums, striker Matěj Vydra has plenty to be happy about: the 20-year-old, who plays for Udinese but is on loan to Watford in England’s second division, was chosen as Championship Player of the Year at the Football League Awards. The player edged competition from Crystal Palace forward Glenn Murray and Blackpool winger Tom Ince. Vydra has scored 20 goals this season to lead his club’s bid for promotion under Gianfranco Zola. 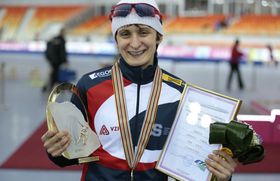 Martina Sáblíková, photo: CTK Czech speedskater Martina Sáblíková won her tenth career gold at the Worlds in Sochi, Russia, at the weekend, triumphing in the 5,000 metres. The win also represents Sabliková’s sixth consecutive 5,000 metre title. The skater clinched the medal with a time of 6:54.31 – nearly nine seconds ahead of her closest competitor Ireen Wust of the Netherlands. 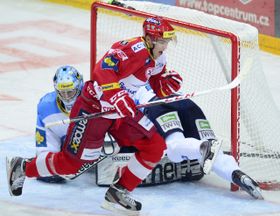 Slavia Prague - Plzeň, photo: CTK In hockey, Prague’s Slavia opened their semi-final in fine form, downing opponents Plzeň 3:0 to take a 1-0 lead in their series. Tomáš Hertl, Petr Jelínek and Lukáš Zejdl all scored before a record sell-out crowd of more than 10,300. Game 2 takes place again in Prague later on Monday. Zlín and Třinec are the other teams in the competition; their semi-final series begins on Tuesday.