In Sports News: the Czech Republic defeats Kazakhstan to advance in Davis Cup; Plzen and Třinec reach final in hockey playoffs; in the NHL, Jaromír Jágr sees winning start with the Boston Bruins; 12,000 people take part in the Prague Half Marathon. 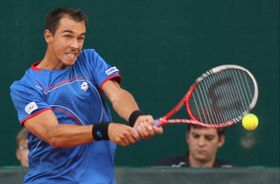 Lukáš Rosol, photo: CTK The Czech Republic’s men’s tennis team at the weekend dispatched Kazakhstan to advance to the Davis Cup semi-final. On Day 1, the defending champions won both matches, but the lead was cut in half on Day 2 when Radek Štepánek and Jan Hájek were beaten in the doubles. The second match (on the second day) was between Lukáš Rosol and Evgeny Korolev and was a very tightly fought affair, going 7-6, 6-7, 7-6, 6-2 in Rosol’s favour. The third win in the best-of-five clinched it for the Czechs; after the match, here is what Lukáš Rosol had to say:

“I felt that I owed it to the team, as I joined a little late and also because Radek couldn’t play. I knew I had to win today. I don’t know if the others were ready to win if had it gone to a decider in the fifth match but luckily it wasn’t needed.”

The Czechs will host Argentina in the semi-finals in September. Key player Tomáš Berdych, who was out with injury now, has already texted team head Jaroslav Navrátil that he would be ready to play. 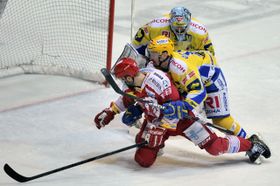 Třinec - Zlín, photo: CTK In hockey, Plzeň face Třinec in the league’s playoff finals. They begin on Tuesday this week. In their semi-final last week Třinec defeated Zlín in their best-of-seven series, securing four wins to Zlín’s two. In their final game Zlín shocked Třinec by scoring in the first 25 seconds, but the latter team was able to regain composure and go on to win. Třinec are in the final for the first time in eight years, while Plzeň haven’t been there since 1992.

NHL action: Jágr gets off to winning start with Bruins 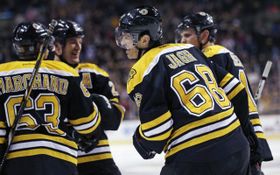 Photo: CTK Forty-one-year-old hockey star Jaromír Jágr got off to a good start with his new club the Boston Bruins: they defeated the New Jersey Devils 1:0 on Friday. Jágr got a pass in front of legendary Devils’ goalie Martin Brodeur which deflected off his skate into the net. The goal – Jágr’s 680th – was the only one scored during the game. Afterwards, the playerjoked that at 25 he would have been unhappy with such a sloppy goal but that at 41 he was basically happy any time he scored.

In their next game, Jágr and the Bruins were not as lucky, losing 2:1 to the Montreal Canadiens. The Canadiens’ Tomáš Plekanec assisted on the game-winning goal.

Some 12,000 take part in Prague Half Marathon 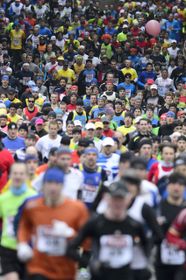 Photo: CTK Around 12,000 people took part in this year’s Prague Half Marathon which took place in the capital on Saturday. Zersenay Tadese of Eritrea won the race with a time of 1:00:10, meaning organisers’ hopes of a world record in the 15th edition of the race were dashed. The fastest of the women was Kenya’s Gladys Cheron, who set an event record of 1:06:47.

Among famous Czechs who took part, was former Juventus Turin midfielder Pavel Nedvěd, who lives in Italy. It was his third time taking part: he finished 1,646th overall. He told idnes afterwards that running used to be “easier”. Others who took part were well-known cardiologist Jan Pirk (956th) and Olympic kayaker Vavřinec Hradílek (2294th).