Rosol takes career first title in Bucharest at age of 27 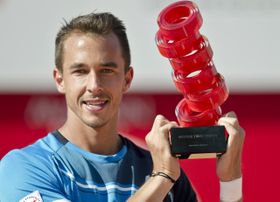 Lukáš Rosol, photo: CTK The Czech tennis player Lukáš Rosol has won his maiden ATP title at the age of 27, after overcoming Spain’s Guillermo Garcia-Lopez 6-3 6-2 on Sunday in the final of the BRD Nastase Tiriac Trophy in Bucharest. Perhaps previously best known for knocking Rafal Nadal out of Wimbledon last year, in his first ever tournament final Rosol made light work of Garcia-Lopez, winning the clay court match in just 67 minutes. With tears in his eyes, the Brno-born player dedicated his victory to his recently deceased father, who introduced him to the sport as a child.

In the absence of Tomáš Berdych and with Radek Štěpánek not fully fit, Rosol was the Czech team’s most important player in a successful Davis Cup quarter-final in Kazakhstan early this month. Tennis legend Ivan Lendl was part of the Czechoslovak team that won the tournament in 1982; speaking in Prague on Monday, he said Rosol’s impressive performance in Astana will have stood him in good stead.

“What characterises Davis Cup matches is that they can destroy a player or give him a boost. If somebody loses the fifth match against somebody they should have beaten, it could take him six months or a year to get over it. By contrast, when somebody wins a big game, or like Lukáš in Kazakhstan is the number one player for the first time, it can visibly help him.”

Lukáš Rosol, who beat three seeded players on the way to Sunday’s final, has now risen from 48 to 35 in the world rankings.

Plzeň edge ahead of Sparta with five rounds to go Jablonec - Viktoria Plzeň, photo: CTK With only five rounds left to go, Viktoria Plzeň have pulled two points ahead in the race for the title in Czech soccer’s top division. Plzeň were level on points with Sparta Prague going into the weekend, and would have looked on happily as the latter could only draw 2:2 with Jihlava in the capital on Saturday. The West Bohemian side seized their chance on Sunday, beating Jablonec 3:1 on the road to put Plzeň in pole position to take a second title in three years. 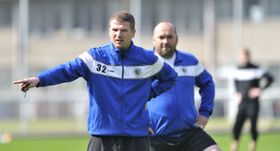 Luboš Prokopec, photo: CTK Elsewhere, the youngest Czech first division manager ever got off to a winning start at the weekend; in his first game at the helm Luboš Prokopec, who is only 31, led Hradec Králové to a 2:0 away win over Teplice in a bottom of the table scrap. 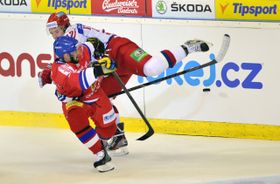 Czech Republic - Russia, photo: CTK The Czech Republic’s ice hockey players have failed to defend their title in the Euro Hockey Tour. The Czechs lost 2:1 to Russia in Brno in their last match in the Czech Games on Sunday, making the latter this year’s champions of the four-nation competition. Attention now turns to this year’s World Championship, which get underway in Sweden at the end of the week. Czech coach Alois Hadamczik has called up 10 players from the NHL as he and his squad bid to take the title for the first time since 2010.